I didn’t write yesterday because I fell asleep Friday night while grading and then got up Saturday and kept grading. No art. Just trying to catch up. Not doing a great job of it. I did finally get to quilting at some point last night…and into the morning. I’m planning on doing today slightly differently. For one thing, I can’t go to sleep at 1:30 AM on a school night.

Grading meant cats lying on my stuff. It was hot yesterday, close to 100 degrees. Southern California sucks at Fall weather.

Then he moved to the notebook. Because I was obviously using it, so lying on it made sense. I picked up his head to put papers under it a few times…

This one was polite and just laid upon the graded paper pile. Although then I had to extend the pile past her because she was already lying on it. 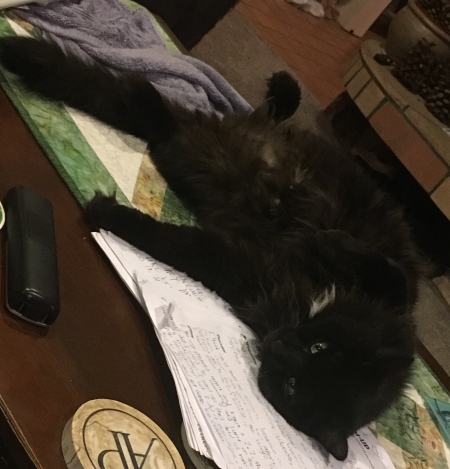 I realized I hadn’t touched this in days, so I did 4 nights’ worth…basically finishing the iris of the eye and starting on the white part…

I keep trying to use a more sketch-like way of stitching, but I’m inherently ordered in how I stitch I guess.

Then I made it into the quilting space around 10:30 PM…on a day when I had nothing but errands to do. Well. And grading. I was trying to get to a certain point. I did not. I gave up. Interestingly, here’s when I do all my work…after 9 PM.

Still debating this app. It might work. If I can remember what each icon is for. Plus at some point I’ll probably have to pay to have enough tasks…we’ll see. I don’t think this is one of the ones that charges monthly. I don’t need that level of tracking. And the last one I paid for disappeared with the new iOS…I’m still salty about that.

I’m still outlining stuff…I’ll be doing that for a while.

That’s a fun heart. I want to do one like that again…much more decorative than in the old days. My hearts really have changed over the years. 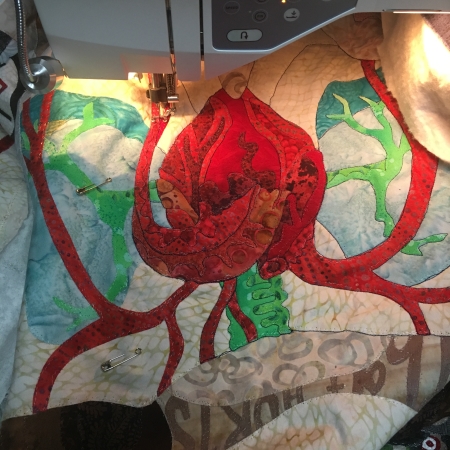 The eyes haven’t changed much…there’s only so many ways to make an eye. That’s not true. That might be a challenge. Huh. I need drawing time. Seriously need it. 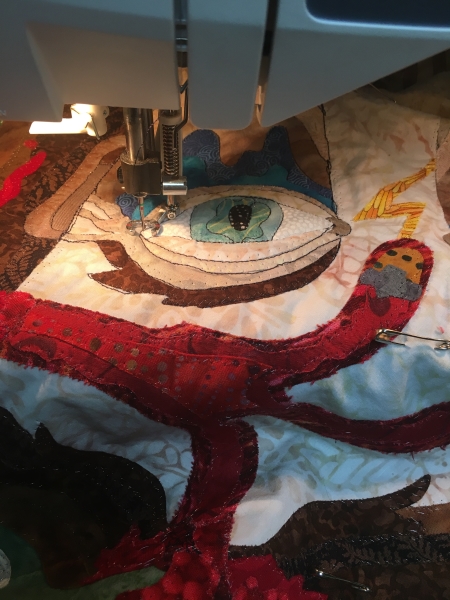 I did her torso and the head, except for half of the hair. I still need to do the other arm, but I’ll do the chalkboard first. I meant to buy thread for the chalkboard when I got the background thread, but I forgot. I’m hoping there’s something in my pitiful stash so I don’t have to go back to JoAnns this close to Halloween. Damn.

I could have gone to bed at midnight…that’s about when I started quilting the head. But I didn’t. I kept going. I wasn’t tired. 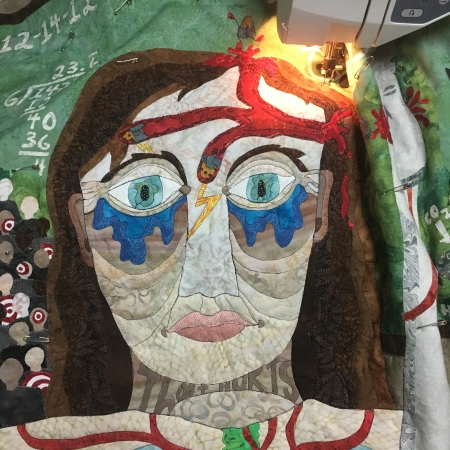 It’s kind of boggling how much time some of this takes.

My plan for today is to finish up the school stuff that I have to do and then start quilting. I’d like to get the outlining done today. I don’t know if I can, but that’s my goal. Then I can do background quilting all week and hopefully make time somewhere to go buy binding fabric and get it bound early next week. It’s taking too long. It’s not really…I was drawing in mid-August…and basically I’ve worked on it solidly, almost every day, since then. While working full time. But it’s taking up a lot of space in my head. Certainly last night while quilting the path that bullets would take through the head…you can only think about that shit so much before your brain gets tied up in knots.

In other news, the girlchild has been accepted to a school program in Madagascar…you know, where the outbreak of plague is. Yeah. Exciting stuff, but a bit scary for all of us. She’ll have an awesome experience…just getting there will take her two full days. But very cool opportunity…

OK. Work briefly and then quilt until I have to stop…