So. Thursday. What certain days feel like. Thursdays are. Thursdays often have a meeting at the end of them. Thursday mornings are tired, but not as tired as Friday mornings. Thursdays don’t really have a wish or a hope attached to them…just the potential for hanging out with people after work for once. Thursdays often have dinner issues because I’m tired of what I’ve been eating all week, but I don’t want to cook. Right now, Thursday also has deadlines, things that have to be done before tomorrow. Some of those things have been stacking up, getting pushed into the corner, but no longer small or quiet enough to stay there. Now I have to step around them, they’re so big and in my face. I should deal with them. I’m pretty sure at least three of them are on my calendar for before school today. With my headache. My stayed-up-too-late-again headache. Yup. I named it. Then I medicated it. Feels like I will have to medicate it again.

Sometimes I can’t handle all the people around me. Ironic, since I’m a teacher and I’m surrounded. It’s less the kids and more the adults. One of my former students found me yesterday after school. She was a tough little thing, lashing out, never quiet, not the best student in the world, a lot of Sorry Ms. Nidas. And then she would turn around and yell at some other kid at the top of her tiny lungs. I recognized her. Couldn’t remember her name until I got home and found my old pictures. She’s graduating this year, not like a lot of others, she says. Too many baby daddies and mommas. Sad. I know about some of those. Then she says something about taking Biology three times. I think about what I remember of her…ask her if she finally passed (they have to take it until they pass). I look at her shirt, some logo about not caring. I tease her about that. Then she says, no. I took three different Biology classes; I’m going to college. I love Biology.

Wow. OK. Cool. I tell her the shirt is a lie. She admits it. I tell her I’m really proud of her, because I am. Because you know when they seek you out 5 years later to tell you that shit that you were part of what mattered. And I needed that yesterday. Her name is fixed in my head now. I hope she rocks the next step.

That reminds me. I want to try some experimentation with at least one quilt this summer, to make it in a way I don’t usually make it. But I have to decide about deadlines. This is after I got two rejection notices yesterday from a show I didn’t enter this year. I was so confused. Freaking out really, because I knew I’d entered one of the pieces in another show, so I thought I was going a bit nuts and had forgotten completely about an exhibit. And that I’d double-entered something, which is a big no no. Well. I didn’t enter…didn’t have new work available. So I wasn’t crazy. It was a weird moment though.

I sewed on this…the purple looped feather stitch (that’s what they called it…I call it a stupid pain-in-the-ass stitch)…on the left. 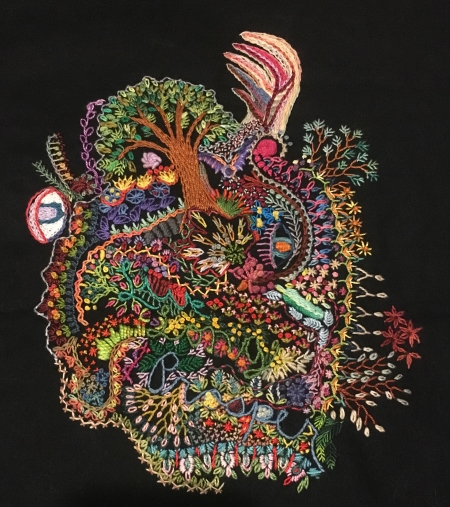 I graded some…because I need to get caught up. Aargh. Always the catching up.

Then I cut tiny pieces out for a long time. Too late… 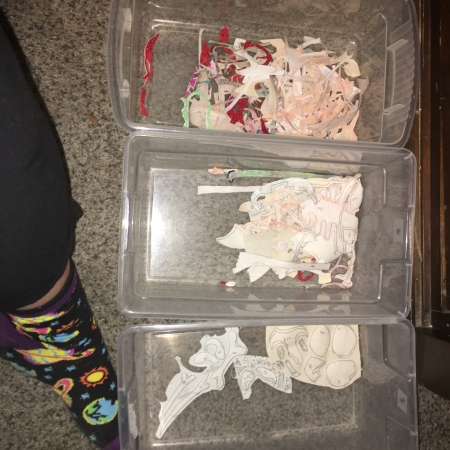 But I didn’t finish. I needed to go to bed at least a half hour earlier…so staying up another half hour or more to finish these would have been really fucking stupid. 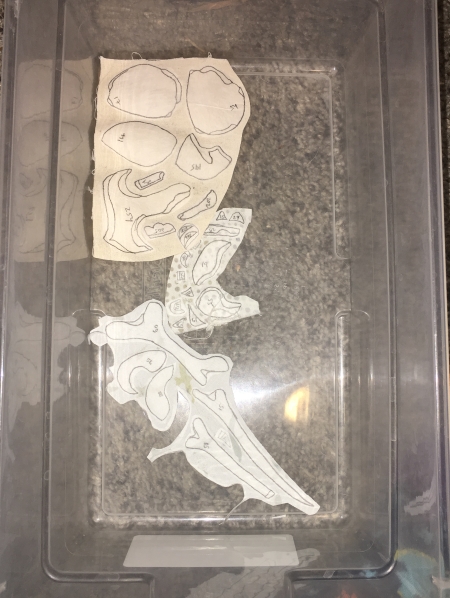 Tonight I finish those and hopefully start ironing.

That’s the plan anyway. Plans go awry. And I haven’t been good about anything getting done lately. Or being with people apparently either. Not just an introvert, but a mostly antisocial introvert. Woo hoo!