So it was an insanely busy weekend. But I managed some drawing time…like I wrote on Saturday, I’d decided one of the problems with this drawing was the existing head. It wasn’t quite right…her expression was off. At least for what I wanted.

Then I filled in with white paper…this thing is like a Frankenstein drawing with all the things I keep cutting off.

That’s as far as I got Saturday…and then last night, I started drawing in. No the old head isn’t staying. She’s just watching…

I still don’t think this thing is done. For one reason…there’s no dinosaur yet. And there needs to be a dinosaur (can’t think if I’ve ever put a dino in a quilt? Don’t think so…it’s about time.).

I’m using this Google extension Momentum on my home and work computers. It makes you write a focus each day…Sunday was impressive. But the to-do list went from 16 or so things to just 5, so I did good. 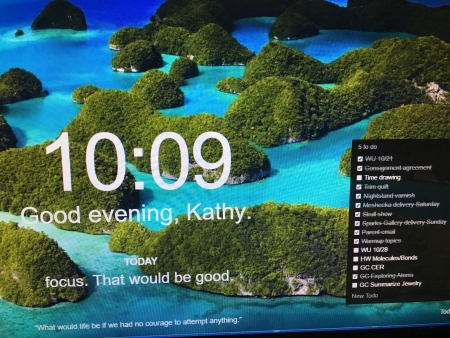 I made the semi-last-minute decision to add a cloud to this thing, but was trying to figure out how to attach it without the staple gun that I’m pretty sure is at my ex’s house. The animals were not helping. 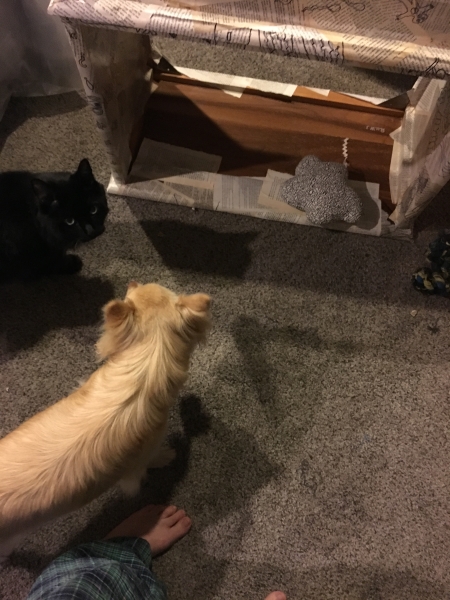 Yes. I made a cloud out of fabric and stuffed it. I might make more.

This came in the mail on Saturday.

It’s hard not going to the opening, but oh well. People are there seeing her, vulva and boobs and all. No there’s no penis. Why? Because she’s a goddess and the only appropriate place for a penis in that scenario is perhaps in her hand. Of which she has 10.

So she’s premiering in Houston, Texas, right now at IQF, which I think officially starts Wednesday or Thursday.

That quilt has a lot going on in it.

Then over the weekend, Quilts=Art=Quilts opened with two of my quilts…although I haven’t seen pictures of them yet at the show…

And the ever cheery You Make Me Wanna Die…

Yeah. That one. Crazy painful. Or painful crazy. However you wanna look at it.

So hopefully people saw those too. No penises in any of them…although technically there’s a male in that one. Maybe 2.

OK. Well it’s Monday. I have an early parent meeting. It’s Halloween, so everyone will be dressed up. The teachers have this thing for themes. They annoy me, the themes (well, sometimes the teachers too). This year is Heroes and Villains. I debated Trump. But I decided to make a different statement…I’m going as Ms. Marvel, the Muslim female Captain Marvel. Easy costume from one of the covers. Way easier than last year’s cow costume, which was hot as hell…but kinda like wearing pajamas.

I’m hoping to come home, walk dogs, and then finish this drawing, maybe even number it…OR make more clouds. Whichever makes more sense to me at the time. I am so not ready for it to be November. Sheesh. Not sure where the month went, but it went. My deadlines. Yikes. And I think I’m supposed to hear about 3 entries in the next two days. Knock on wood. I don’t need to get into all of them, but one would be nice.

*The Style Council, Don’t Matter What I Do

One thought on “Don’t Matter What I Do*”

Bound and ready for photography. I drew this in my head while he was still on the trail. Hoping he gets to finish next year. The Pacific Crest Trail is hard on those who hike it, but it’s also hard on those left behind. Here’s to documenting that. #artquilt #quiltart #pct #pct2021
Desert Bunny will be going to Art Quilts XXVI: Stitching Stories in Chandler, AZ…with another of my pieces.