The part that sucks about finishing a really time-consuming piece, even early, is that all the stuff you blew off in order to get it done is still waiting there, sometimes not very patiently, like a Rottweiler behind the door, slavering, ready to attack.

I spent all weekend working pretty much. Lots and lots of hours of grading and lesson prep and trying to do taxes and FAFSA. Trying to just find all the paperwork to do those things and make sense of the federal government’s wording and questions. Even the help box doesn’t clear it up. Luckily, there’s Google. I’ll be glad when the kids are done and I don’t have to do this any more…I just will be paying it off. It’s ironic that my scrambling to make more money so that I can pay college bills will probably result in their qualifying for less aid. Frustrating! Cornell seems to understand how much money I have available. Too bad Brandeis is less helpful.

Four weeks until Spring Break though. I’m alternately looking forward to having some time off (already!) and worried that it will be too many hours with just me. Inevitably, I will have plenty to do. At least one art quilt, hopefully two in process by then. Plus the yard. The yard is a disaster. So is the house. I keep considering getting a roommate, although they’d have to move out for the summer, but I can’t behave well enough for a roomie. They’d have to tolerate my late nights, sometimes sewing on the machine with music blasting, my inability to clean. The crazy-ass cooking I sometimes do late at night. I made to-die-for blueberry oat bars last night. They’re a knock-off of the Starbucks ones, and they’re not the healthiest things in the world, but holy hell, are they good. I’m gonna have to freeze them so I don’t eat all of them.

Anyway. So the weekend was a clusterfuck for art…except I finished the binding on the quilt in progress and will be delivering it to the photographer today, a full week early. Whoo! And I went to an opening Saturday night. But that was a plus and a minus…

There’s this new place in town called La Bodega Gallery and it’s in this huge old building with soaring ceilings that are a little ragged. And they throw a LOT of shows. I don’t know how much traffic they get during the week, but they’re open 9-5 M-F. Or 12-5…it’s hard to say. Anyway, the thing I love about this gallery is that they get a LOT of traffic, they get a ton of people coming in to see the art. Part of this is because it’s changing up its exhibits every two weeks or so, and they tend to be popular themes, like the Frida Kahlo exhibit last year and the Star Wars one in December. The exhibits sometimes are invite-only and sometimes they put out a call, although honestly, they don’t give a lot of heads up on some of them. The show I saw Saturday was a Pin-Up exhibit and the call went out in mid-January. I couldn’t have done something for that (honestly, I don’t really do pin-ups anyway). But the biggest issue with them is that there doesn’t seem to be a curating process…there’s no culling of the bad stuff. And this time there was some seriously amateurish stuff. But then you see mom taking a picture of her kids in front of the piece dad painted and you think, eh, there’s the future art community maybe. It’s definitely more low-brow than some of the exhibits I go to…in fact, if you go later than 7 PM, odds are you can’t even get photos of the art because it’s so crowded.

So. There’s that. But we went and I got pictures of some good pieces, although I didn’t get them all resized today…running late! I don’t know why. Some perfect trifecta of work, laundry, and dishwasher. Or something. They all need assistance.

They don’t usually have a lot of fiber in these shows, so this one really stood out…even if it’s biologically inaccurate…

And this right next to it…which had no name or number I could find.

Everything is for sale…that crotch is a little terrifying.

There were lots of guns in with the pin-ups. Somewhat disturbing as well. 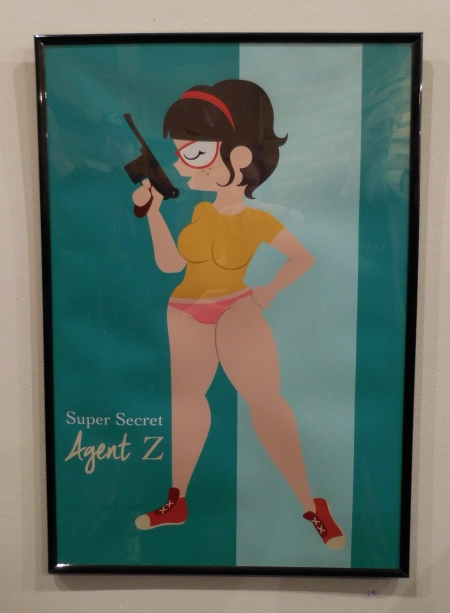 This by Raz Holly. I’ve liked his stuff before. I’ll post more over the next few days. There’s always some interesting stuff and sometimes some stuff that you’d consider dropping $50 on. And they bring art to the masses…I just wish they’d edit sometimes. See…even when I don’t MAKE art, there’s still art.

My next step is a drawing. Gotta make time for that. Maybe I can start tonight…we’ll see. Still battling the FAFSA and taxes for now. Also grades. But I want to get started on the next quilt soon. I don’t like not having something to pick up when I’m having a bad day.