Well hello there Saturday. You’re finally here. Yesterday I determined there was a full moon coming, which might have explained my students’ behavior. Or not. It was a rough week at school. Too much administrative crap. And grades are due Tuesday. And I’m not done. Or ready. Today I am working all day on school and fabric. Seriously, I have about 2 errands to run and I have to cook/prep some stuff for tomorrow, but otherwise, I’m just working until my brain shuts down. It’ll be OK. I’ll feel better afterwards because I can cross some shit off the lists that are taking over my brain. Just in the last 24 hours, I’ve crossed off a million things, like rescheduling the boychild’s flight to school because of Snowzilla or whatever they’re calling the blizzard back East. Now he’s flying Monday. Better than Thursday, which was the other offer (school starts Wednesday). I managed about 17 online issues last night and this morning, but the post-it note for this weekend still has 7 things on it. I’m really liking this method of writing it so I can see it (don’t think about the fact that last weekend’s post-it still has stuff on it that you haven’t crossed off). OK. I put two things from last week’s post-it onto today’s. Even though they won’t happen. Not sure that’s logical, but I did it anyway. I am nothing if not logical. By that I mean I’m not logical at all.

I did not do art last night. I barely did it the night before. Last night turned into a giant mess because of the flights and the girlchild’s phone and a bunch of other stuff, so after dinner, I tried to get caught up on grading and I ended up not getting it all done and just getting frustrated and then I was too tired to do anything else, so I went to bed. Sometimes that’s all you can do. I expect more today though.

I did recently put some new stuff on Etsy, if by NEW I mean stuff that hasn’t been there before, because it’s journal quilts from 2005 I think. I was part of the Journal Quilt Project that traveled to International Quilt Festival that year, and I still have the little quilts. Although there’s one I can’t find, so I haven’t put it up yet. Wait. I just found it. Dammit. Have to write something else on the post-it note.

Because honestly, I don’t remember to do stuff except go to work and make art unless my phone calendar tells me or it’s written on a post-it note. Sad but true.

This one is a little strange. Couldn’t tell you what I was dealing with…postdivorce? 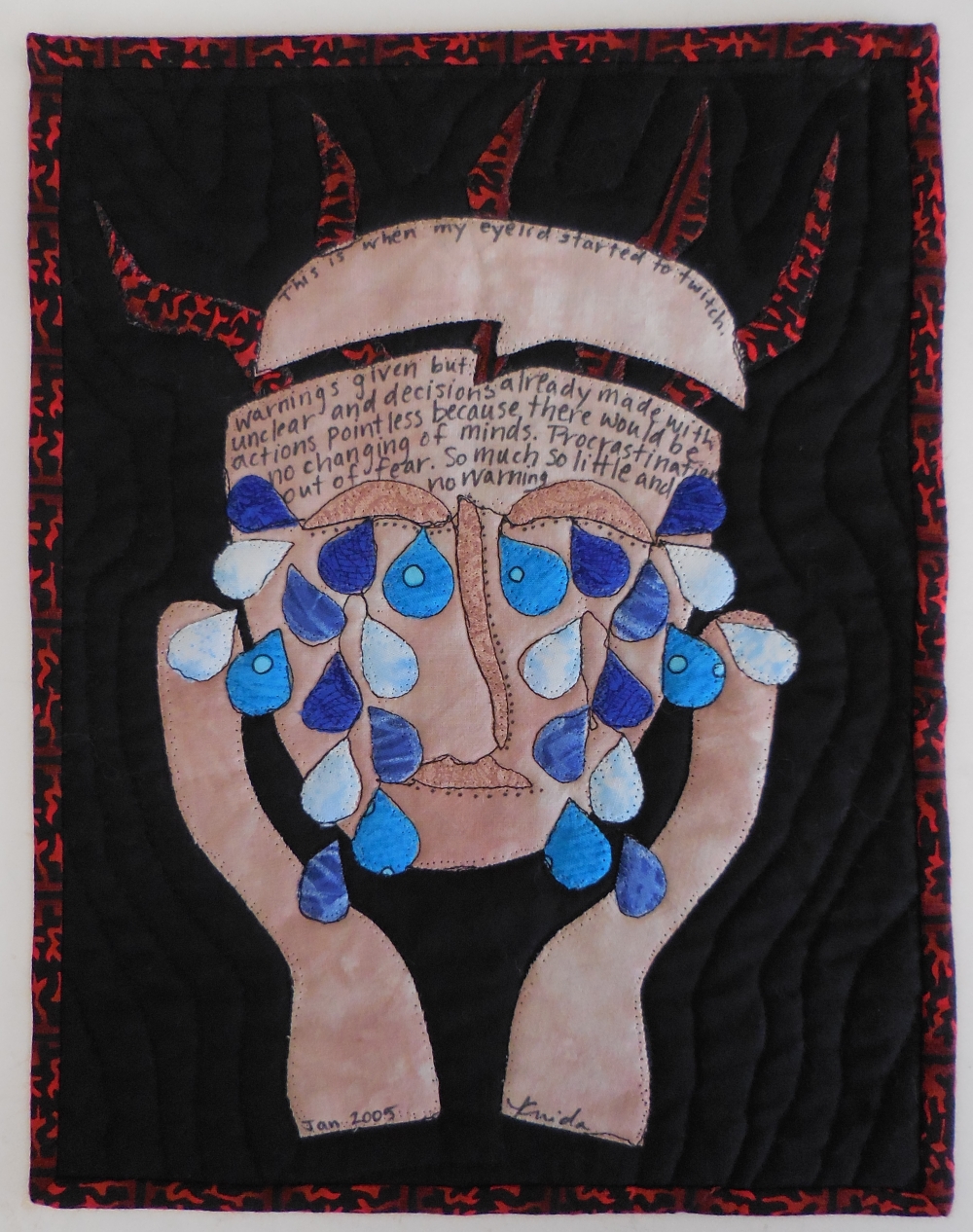 Another one. The relationship I was in was all phone-based due to distance and it was difficult.

Another bird from last year that never sold…one of the few. 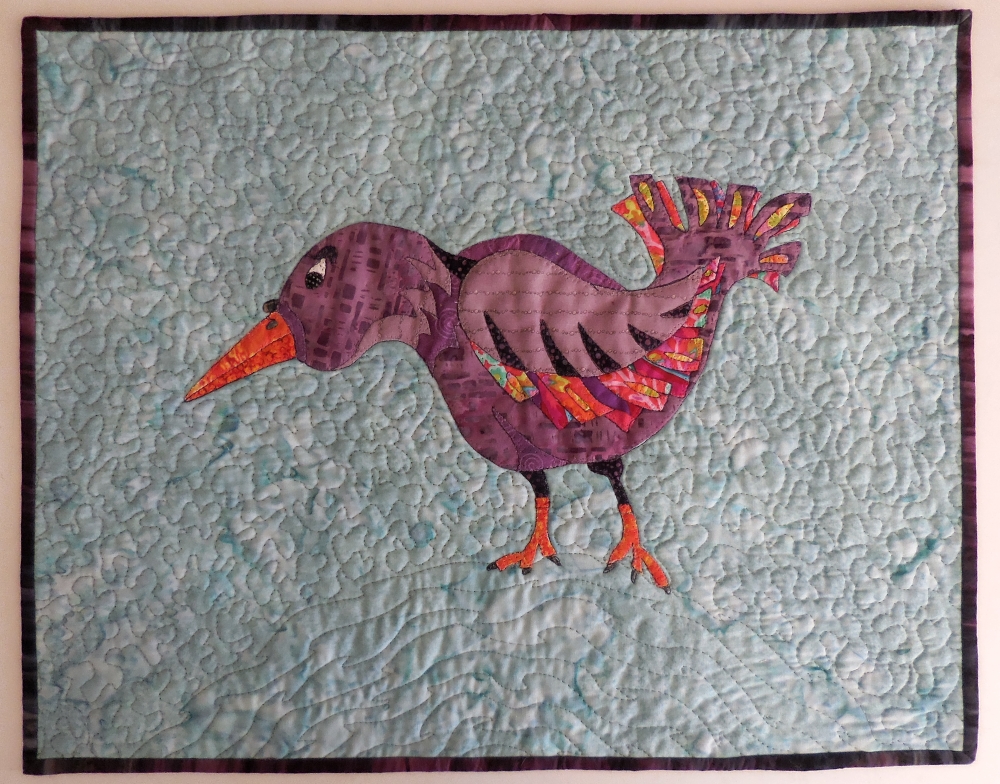 And this one! Ha. I’m not putting this on Etsy. And it has a big sister that’s never been quilted…for those who flipped out over the vulva in One Paycheck, this would give them paroxysms. 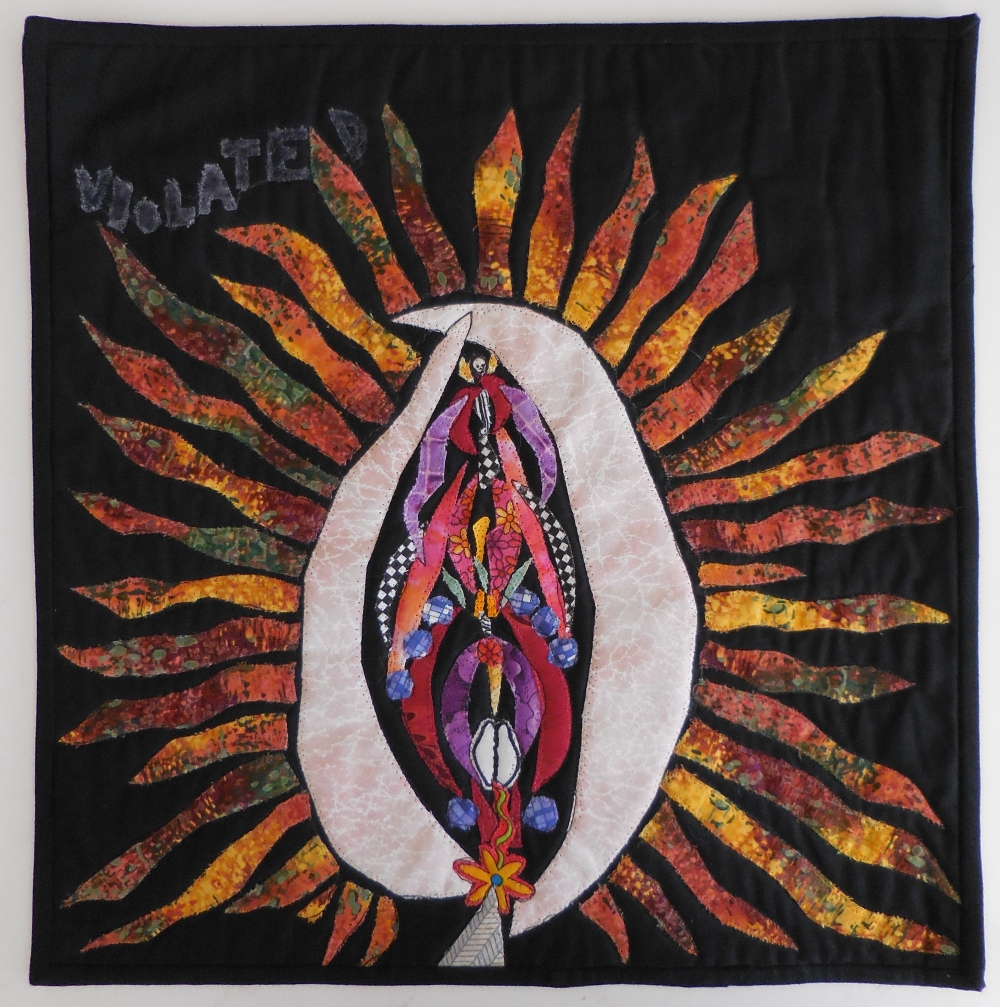 Eh. Whatever. There’s another one of the journal quilts, but it’s not up yet. My Etsy site is easy…it’s just my name. Or the link is over there to the right on the sidebar. I don’t know if my stuff belongs on Etsy or not, but I figured it was a good place to stash the less artsy quilts, the smaller ones, in case someone wanted a bird or a cat. I will probably put the birds up there as custom orders at some point. It does take time to post stuff, and I don’t have any of that at the moment. In fact, I’m done here as well. Gonna go grade (torture myself) for a while and then do fabric I think. I might have to grocery shop first. But there’s a plan to make art today, and that’s all I care about. It will motivate me to speed through the rest of it. Damn post-it note.