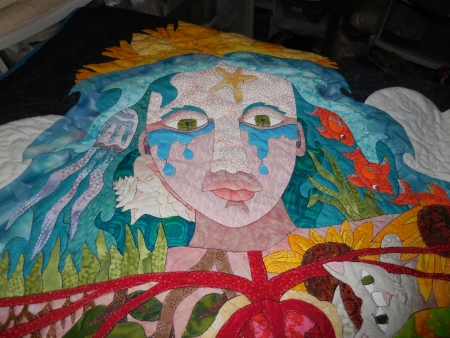 Last night. Actually early this morning. After midnight. Almost 90 hours since the end of January. But it’s done almost a month earlier than I was hoping. I need to finish the other little one so I can call the photographer. Because y’all probably want to see nice pictures of it, instead of all I can get, which is this… 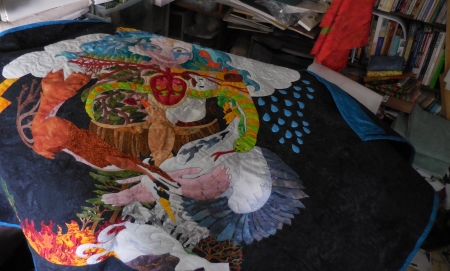 Because it’s kinda big and I don’t have anywhere I can lay it out right now, without cleaning a floor, and I really don’t feel like cleaning fucking anything at the moment.

How do I feel about this quilt? It’s nice. It’s pretty. Sigh. And people like it. Maybe that’s all I have to know. I hope it gets into the show for which I made it, because that would be really annoying if it didn’t. I only have one quilt I can enter in that one, because of the silly restrictions. The reality is I might need to make more of these pretty quilts, although probably much smaller if I want them to sell, because this thing ain’t cheap…you can’t put 90 hours into something and sell it for a couple hundred dollars. I mean, you CAN, but it’s fucking stupid.

But I’m telling you, the next three quilts all have fucking uteri in them, so I will feel much better about them. You have to understand that I am currently being ruled by my uterus. It hurts, it bleeds, it is a crazy mess, and all the hormones it and my ovaries are producing so haphazardly are running my emotions all over the map, fucking with my sleep, my brain, everything. Really, I should do…oh shit, I just had some amazing ideas for uterus quilts. Huh.

Crap. I have so much stuff to do right now, and about 25 ideas for drawings just popped into my head. Which makes me want to cry, because my job…the one that pays the bills…it’s really sucking up some major time at the moment and I’m trying not to think about what that might look like next year. Because I’m trying not to assume the worst. I’m trying to just step back and say, yeah whatever. Just tell me what you want me to teach. I’ll come to school every day and maybe I’ll just suck at it. Because I don’t want to spend another 10 hours a week working at a job that really just would take everything if it could. I want those extra hours for art. I might need those extra hours for another job. And it needs to be a job that I don’t take home with me, because I can’t take on anything else at the moment. The emotional crap with having both kids gone and being alone here in this house is bad enough without letting me make art in that time. I need that time in my head for peace. I really do. As I get older, it seems to get worse. I think I spent so many years pushing all that away and doing mom stuff and job stuff and managing everything that after the Big Depression of 2013 (that is still going on some level), I really can’t go back to that. I can’t be that person any more. And honestly? I have a 19-year-old and an almost 18-year-old. I shouldn’t have to be mom at that level any more. And I have enough years into teaching that I shouldn’t have to be working like a first-year teacher. Ha! As we add technology, which I am doing like a crazy person, and change standards. OK. So there is still a major learning curve. But I don’t get excited when you ask me what else do I want to be teaching…I DON’T want to be teaching anything else.

Fuck. I’m a mess. Maybe I should just blow everything off and draw.

Sigh. No, one of those things is financial aid for the boychild. Need that. Another is food and meds for the animals. I need to take care of them. They take care of me. And food for the week. Can’t really blow that off.

Fucking responsible adult brain. I wonder about Picasso. Did he blow off everything else? Probably.

I’m watching DS9 on the righthand computer, the cat is sitting on my lap demanding pets, the school laptop is behind her, where I’m grading assignments on Google Classroom, and three teenaged girls are eating all the pizza in the world in the living room. I don’t even use that TV any more…let alone the VCR. If I ever remodel this room…probably there will be another computer monitor up there. I did get one assignment completely graded though. I’m getting better at doing these. It’s hard in the classroom though, because often the free time I have is when kids are responding to something on my computer, so I can’t grade at the same time…and the app for tablets fucking sucks at the moment. The tablet the school gave me won’t even respond at all, and the iPad, if you click on a student, nothing happens. Same with the phone (not shocking, probably the same app). So I just stand there, trying to figure out what to do with my “free” time. I mean, really, it’s about 10 minutes per period, but yes, I’m that fucking efficient. I can grade 6 or 7 warmups in that time period. I can get through 5 assignments on Classroom. Every 5 counts. So I’ve been bringing my school computer home every weekend instead and trying to make sure I get through an assignment a weekend. SUCKS.

I saw this fabric online somewhere and it poked at me for about three days before I decided I couldn’t live without it. 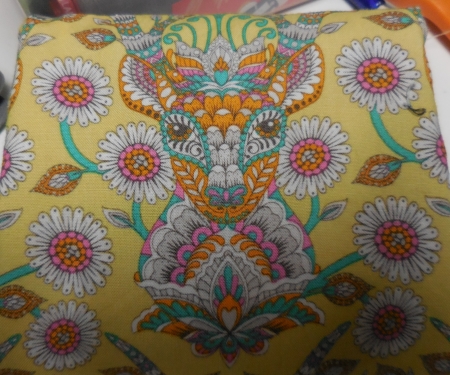 Plus I want to draw some more stuff like that, right? Tula Pink. Interesting. So then I tried to find it and found it on sale, and that’s when this happened…

I can’t really explain it. But there’s Adventure Time and Walking Dead and wooden rulers? I don’t know. Don’t ask. It’ll end up somewhere. I cannot explain my fabric stash. They were all on sale.

By the way, Earth Stories (or most of it) just opened on Thursday at the Kennedy Museum of Art, University of Ohio, Athens. It will be there through early September. So if you want to see my piece and you’re at Quilt National (where my work will NOT be…can I get a high 5?), then head over there in a free moment. 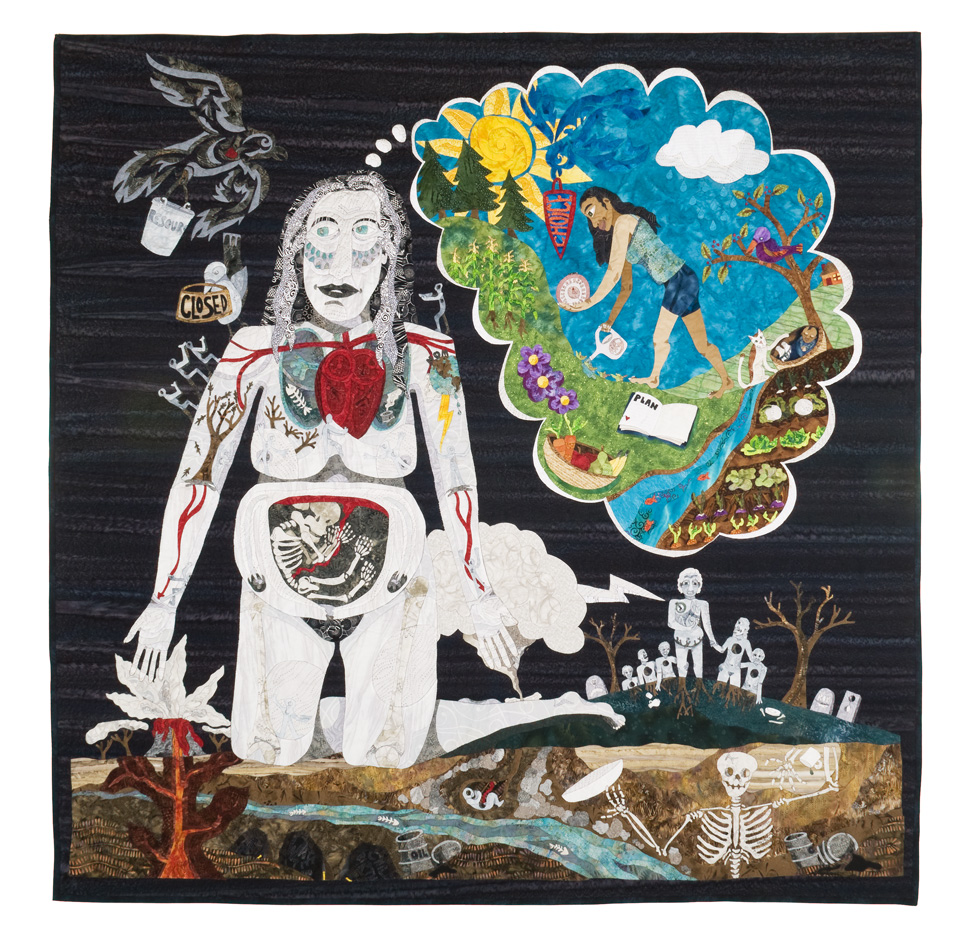 Because not only do you get a uterus, but it has a fetal skelly in it. That sucker was a bitch to make.

OK. I’m getting some shit crossed off my to-do list right now.

2 thoughts on “She Be Done”