The opening last night was nice…the show itself looks really cool, some really interesting work. Although all these local shows can be a pain in the butt for delivery and pick up of work and trying to get to all the openings, I like the opportunity to put my work in with other people’s work that I’m not usually hanging with. There were a few FIG members in this exhibit, but there were a lot of other people whose names I didn’t know. It’s cool to see my work hanging out with theirs.

The show is Art That Cuts, and it’s only at Mesa College through next Friday. Definitely worth a visit, though. Bhavna Mehta was the juror and the class on campus designed the exhibit and all the stuff that went with it. I often say I would have loved to have taken a gallery class like that when I was in school. I even occasionally think about it now (and then slap myself a lot because I don’t need to take that on right now).

Helen Redman is still rocking the art world in her 70s (I wanna be 70 and still making art)…this is her piece To Become Her.

My piece, Some Like It Hot, is hanging on the wall with their work, which I loved…

This piece was fascinating…lots of sewing paraphernalia, but then there are rattles…from rattlesnakes…and they’re wired to rattle…

The piece is Now Is Not a Good Time by Margaret Noble. 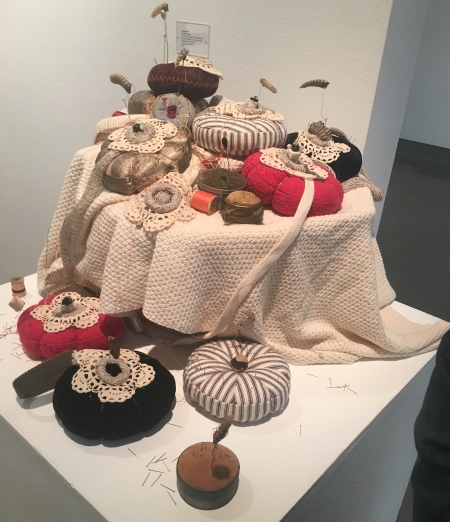 It’s a fascinating piece…here’s a link to a video of it from her website.

This is one of three by artist Kirsten Francis, Sounding OFF…

I was looking at her work and I liked it, and then I read her name and thought, hey. I know that name. Why do I know that name? There was a printmaker about a million years ago whose work I just loved, but never had the money to actually buy any of it. But I saw her at Artwalk or something. Well this is her. Obviously, she’s moved away from the printmaking, but I was so glad to see that her work still speaks to me. Weird, huh?

These were fascinating. One of the materials used in making this? Fire. A beautiful piece, Colour Bunny, by Vincent Wray.

This is a tiny piece, but so detailed. Little Hands, Little Feet by Nicole Waszak.

And this piece…Resistance through Existence II by Martha Gil…her Instagram is @gildednopal. Definitely worth a look at her nopal-influenced uterus stickers on Etsy.

Home after all that, picked up dinner for me and the sick guy, who was getting all the sad looks from Calli.

I was pretty exhausted. I did some sewing of wool circles and eventually made it to a standing position to work on this…it’s slow. But it’s coming.

Yeah that one boob was way too high. Although that’s more realistic. Oh well.

Tonight was to be gaming, but sick guy is too sick. So I’ll be grading. It’s OK. I need to get it done. And maybe I’ll have the energy to draw as well. I won’t be marching for science unfortunately tomorrow…I’ll be driving to LA instead for an artist talk and take down of a show. Long day.

But first to get through this one…to the fun stuff, when I pick up the pen.