I was more successful at making art last night. Despite the long day, I managed almost 2 1/2 hours on the quilt…mostly dealing with the fleshy bits. But before that, there was dinner and a little bit of this. Remember last week when I said it would probably only take 5 more nights to finish these? Except I wasn’t home for the next 4? Well here’s where I finally worked on it…

Still not done. Working on it.

Then I came in here and dealt with paperwork for one show, prepped it all and sent it off. I still need to do another one, but I need to buy a shipping box, which means I need to get to the place that sells them during their opening hours, which means I need to NOT be at school during their opening hours. This is more difficult than you might think. I’m going to try this morning, I think.

Then I finally started ironing. I pretty much started with the flesh run…6 fabrics from light to dark. Which means crawling around on the ground under the sewing table, because that’s where all the flesh colors are. I mean, something has to go under there…it’s not like there’s colors I don’t use so I can hide them away. I realize when I’m 70 that crawling under the table might be an issue, but at 51, I’m still doing it.

So I ironed all of those down. It takes about an hour to pick them, and this is a smaller, less complicated figure than most…and then an hour to iron them. Here’s one of the colors… 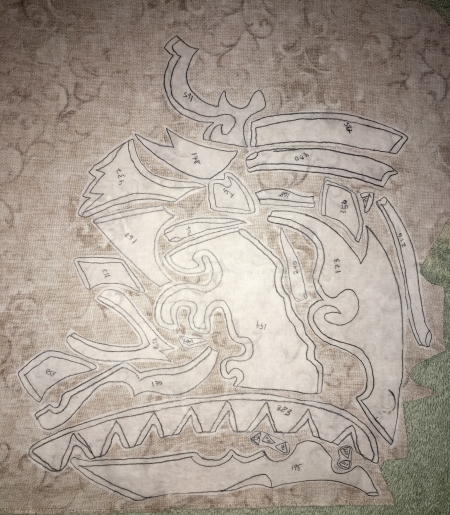 I do try to fit them together in such a way that I’m wasting the least amount of fabric. When people think that I am only right-brained, I show them things like this and explain why, and they raise their eyebrows right into their hairline. It’s the same when I tell them about numbering over 2000 pieces.

It’s a process. It works for me. Here’s all the fabrics I’ve used so far…not a lot of color yet.

It will come. She’s decorated. It’s part of the poem. So there will be color all over her. I just haven’t gotten to that part yet.

Here’s the pile of stuff to be cut out.

This is the hair, the decorations, the tree, the eyeballs, the lungs, the heart…all the non-fleshy bits. They all still need ironing. I guess that’s tonight…after yet another meeting. I’m supposed to have book club, but I don’t think that’s happening. I haven’t given up on it yet…but I’m pretty sure I’m not going. Sigh. It’s OK…I haven’t finished the book anyway. I will…just not this week, not with meetings and crap every night until I collapse on Friday.

Meanwhile, here’s Satchemo, lying on my lunch bag. He likes the kitchen counter. It has the potential for foods.

Here’s the poster/announcement for the Extreme Fiber Art show I’m in right now in Springfield, Missouri, great idea of Pam Rubert. My quilt Untied is in the bottom center, next to Susan Shie’s work. 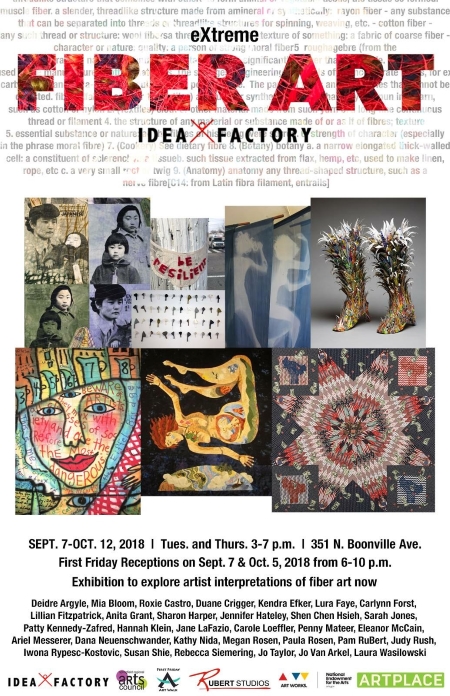 And then I saw this yesterday…Richard Scarry was my favorite when I was a kid. I blame him for my artistic need to fill the page…OVERFILL the page. Him and Dr. Suess…way too much influence, if you ask me.

Ruben Bolling is apparently a pseudonym for Ken Fisher, a cartoonist, the author of Tom the Dancing Bug. “His pieces demonstrate concern about the power of large corporations and satirize the way government has been corrupted by money.” According to Wikipedia anyway. Well, I appreciate his comic anyway. You can go check out some of his other comics here. I could spend some significant time over there, but I need to go buy a box. Before school.