This morning has involved maggot collection, pool filling, trying to persuade the cat to catch and eat the fly that is harassing me, and my milk gone bad, so no breakfast tea. I’m not happy about that last one. My office is a disaster, there’s too much on my to-do list, and somehow I’m leaving town in the middle of all that. A bit more panicky than I like, honestly. At some point, life becomes normal again, with the day job and the night job and all the errands in between. But not this week.

I got a couple of hours of ironing in yesterday…not as much as I wanted, unfortunately. Too tired. Awww. Puppy…

Girlchild came home in the morning and the dogs were very happy. 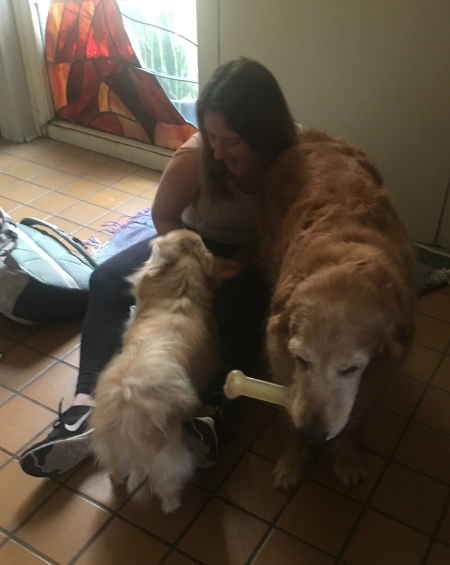 I still have a huge pile of leaves that need to be ironed together, but won’t be ironed down until I have the background ready to go.

So then I started on the second-to-last of the 9 or so figures in this quilt. This is one of the original figures from the drawing I did back in 2012 or so, with arms turning into tree branches.

It’s hot still. Not as hot as it’s been, but the animals have been suffering as much as I have. 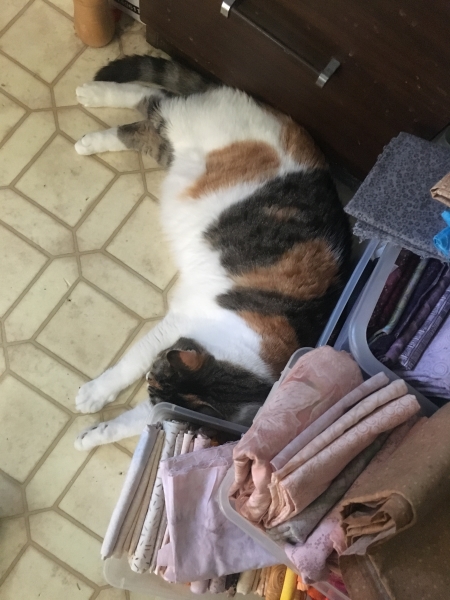 So I drew this back in 2012 and it wasn’t meant at the time to be Trump, but it certainly looks like him.

We wanted to go see some art last night, which we did, but mostly we sat and watched my friend Kathleen Mitchell and her studio guys do some glasswork. Freakin’ amazing and fascinating to watch.

Yes, we went somewhere hot on a hot day…but like I said, it was amazing to watch them work.

And the outside felt much cooler after hanging out in there.

We had a drink around the corner, where another Gloria Muriel mural dominated the place.

We had gone in there to wait out the end of an artist talk, so we could go see the art in that gallery without disrupting the talk. The work was by Dave Persué and included paintings for a book he published that he wrote with his mom.

I bought the book, yeah. I really liked the paintings and the style. The exhibit is The Origins of BunnyKitty: The Book Paintings, and it’s at the Athenaeum Art Center in the Bread & Salt Building in Barrio Logan (1955 Julian Avenue, San Diego 92113) through September 13. Kathleen’s glass studio is down there too. We meant to go to the rest of the Barrio Art Crawl, but got waylaid by glass fascination.

I did finish this before we left, but didn’t take a picture of the whole thing until later. I wanted to iron more, but I was just too tired by the time we ate and got home.

I’m hoping to get more ironing done today, but I know we have a dinner thing tonight as well, so that will probably cause an issue with artmaking. Plus we’re leaving early tomorrow morning for Arrowhead. Schedules are always adapting. I’m doing what I can. As always.