You’ve probably heard (if you care) that the Threads of Resistance exhibit got pulled from two shows, one in Virginia and one in Michigan (wow, I don’t know anything about dealing with censorship in those two states…excuse the irony). The problems started in Texas, though, and continued in North Carolina. There’s no definitive answer as to why, but one assumes it has something to do with complaints and vendors and how the organizers make their money.

I’m back to that belief that we should allow differing opinions without demanding that organizers shut down exhibits because they are that offensive to someone. I would say that there’s something about our current political climate that makes people think they can demand that their viewpoint is more important than anyone else’s, but realistically, that’s not true. Censorship has been around longer than that. It’s disappointing that (a) the organizers did not stand by their commitment to the exhibit and (b) that people have to be so narrow-minded as to not allow other viewpoints to be around them. If I were in an exhibit of work by say Trump supporters or of anti-feminist work or anti-immigration pieces, I would view them and maybe converse with organizers or artists if they were available. I wouldn’t get angry. I would ask them why they feel that way or dig a little deeper (if allowed), and then what I wouldn’t do is go demand the organizers remove that exhibit or piece from the show. I am an open-minded snowflake, you see. Maybe more people should try that. But you know those people aren’t reading this blog.

Note to self: Don’t talk to people on Facebook unless you know them in person, and even then, it’s questionable. I just hate it when people make shit up, though. I often start typing something and just delete it. It’s better that way. So conversations have to be in person? Maybe. Maybe when they’re looking you in the face, they can’t call you ignorant 17 times. Sigh. Seriously. This is like my day job.

I can’t walk away from Facebook, unfortunately…I have at least one group where I manage their postings. So I’m on there. I just need to moderate my own responses even more than I already do. Or maybe not.

Threads of Resistance will continue to the shows in Massachusetts, Pennsylvania, and New York…no worries there. And both of my pieces have body parts (they both have penises! And uteri! And boobs!), so they are in what one woman called the “vulgar” room. You know, the old definition of “vulgar” was characteristic of or belonging to the masses…so I’m OK with that. Here’s the two pieces (weird that they both have trees in them, eh?)…Work in Progress and Absolutely Nothing… 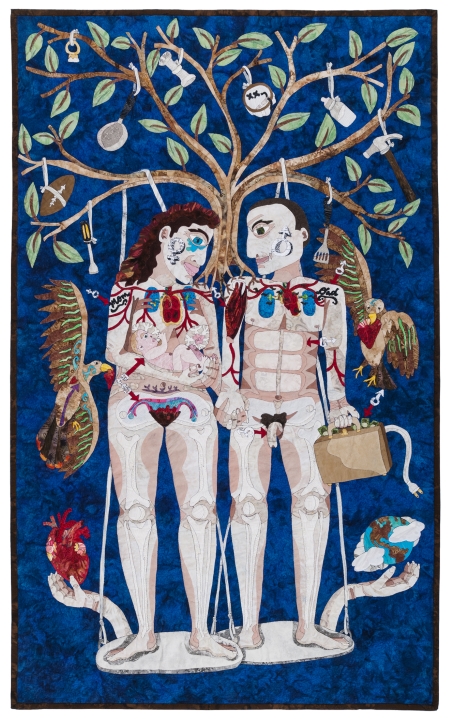 Meanwhile, I’ve gotten almost nothing done today except researching portable air conditioners and trying to get the tree guy to call me back. Yesterday was better…although I need to get used to having that quarterly meeting in the middle of the day instead of in the afternoon. I can’t get anything done before it, and it was a stretch to get stuff done afterwards. During the school year might be more difficult.

Oh yeah, we had a peregrine falcon by the pool on Saturday. Very cool…not sure I’ve seen one of them locally, although they are native. Apparently. Great picture, right? We tried to get closer and of course, he flew off.

We went to the opening at Visions Art Museum down in Liberty Station…Kathy Weaver’s works were amazing. I have liked her work for many years and it was nice to see it up close. Then on to dinner at Soda & Swine, one of our favorites, even if we can’t ever remember which is spicier, the Hog or the Swine.

Then home, where I finished weaving this for the meeting the next day, although the woman I was supposed to be handing it over to wasn’t there, ironically. Strangely, I thought this and the two small quilts had to be done by yesterday, so I worked to get them done, and both of them are still sitting around my house. Oh well, I’ll mail this off… 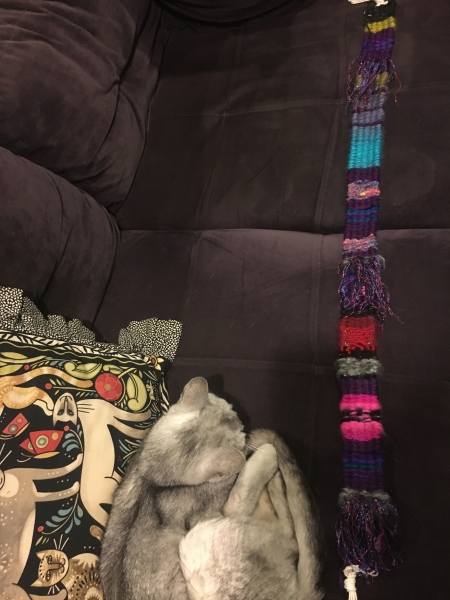 I finished tracing Wonder Under Saturday night at around 9:30 PM, with a total of 22 hours (just under the 23 I finally estimated, but over the 20 hours I originally guessed). I had already started cutting out on Thursday. I think there were about 10 yards of Wonder Under total (some really big pieces)… 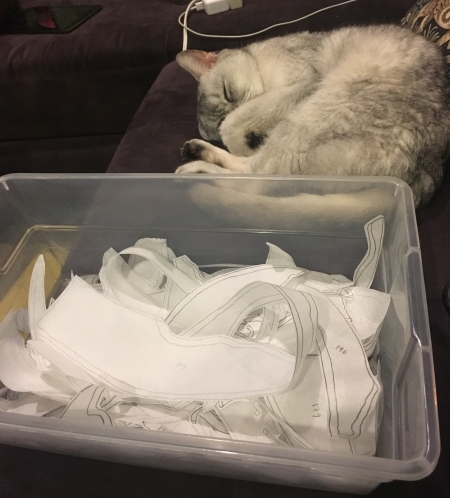 Saturday night, I finished the half yard from before and cut out another yard…so that was 4. I guess that means there were 11 yards, although one’s not full. Because there were 7 yards left on Saturday night…

Yesterday, puppy was really tired. He was so happy here…tummy scritches and a fan blowing his fur around. Bliss. 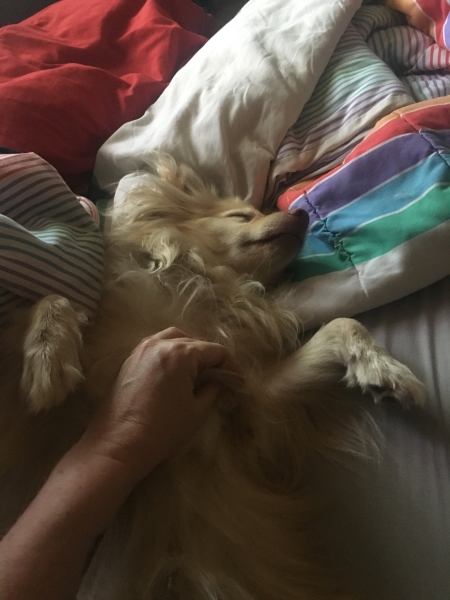 After dinner last night, I watched Harlots (for the costumes, of course) and cut more Wonder Under out.

OK, so shows like Harlot are entertaining, but then the feminist in me gets upset about the stereotypes and the portrayal of women and the lack of realism in general, and then I wonder what I can actually watch any more that is just kinda fun and interesting and not causing me to question my entire existence. I can’t watch movies any more without wondering why the women always need help, get kidnapped, wear totally inappropriate clothing for the task at hand, or just outright get killed. Something about being old and female, I guess. By the way, if you ever watch The Rover, the whole movie is pointless until the last 5 minutes, and you don’t know it’s pointless until the last 5 minutes.

I kept watching Harlots (with the great costumes) with the hot and furry boy curled up next to me.

I only have 4 yards left to cut out…so at some point on Sunday, I must have gotten 3 or 4 yards cut out. The box is full…I’ll have to upgrade to a larger one. 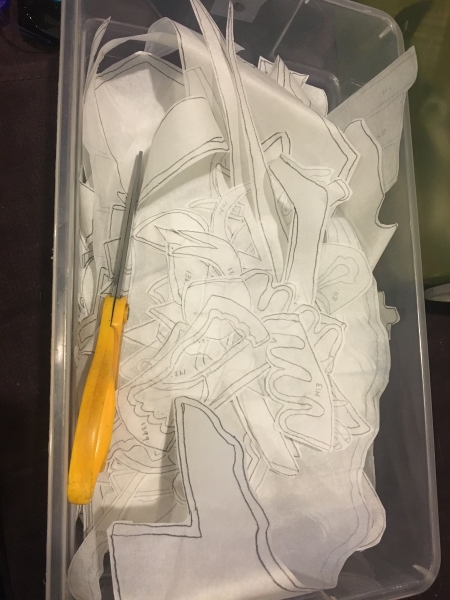 So I started writing this post in the morning, a good 5 or 6 hours ago, and then got heavily side-tracked by a need for cooler air. We researched air conditioners, we’re currently testing a portable unit in my office (it’s a bit large), we looked at a wall unit that was heavily ensconced in years of dust in my parents’ barn. We bought another fan. We might take back the portable unit if it doesn’t do what I need it to do. Sigh. And maybe plan for sometime in the next year or so to put a wall unit in here. Part of the remodel? The remodel I can’t afford? Yeah.

Well the tree guys are coming tomorrow morning really early, to beat the heat, so that’s a whole ‘nother issue. I can’t leave the house while they’re here…the dogs are gonna be frantic. I have to be up early. I want to be working on something. If I finish cutting out all the Wonder Under tonight (possible), then I don’t have a background fabric yet…unless something lying around here would work. Maybe. But I can sort Wonder Under and maybe get started on fabric…but only if I decide permanently what to do about this giant beast of an A/C unit in my office. Double sigh. Because I had to move a bunch of stuff around so I could get the window vent in, and I need to decide if that’s a permanent thing, or if we’re gonna leave it jimmy-rigged like this for the next two months and then take it out when it cools off again. Aargh. Decisions. It’s too hot to make them. I can decide to publish this thing though. That I can do.

One thought on “Open-Minded Snowflake”