OK. Well the girlchild is on the first of three planes over the next 36 hours or so. She comes back in 104 days (she actually goes back to Boston, not San Diego, but that’s way closer than Madagascar). Hopefully she has what she needs. Certainly we tried to make sure she did.

She was in here, the office/studio, last night while I was sewing, practicing her French. She can introduce her husband and her sister (she has neither) and ask where the bathroom is. She should be fine.

Me? I’ve been up since 4 AM and have work with 150 7th graders today. I will be fine. I went a whole year and a half where I only slept like 4-5 hours a night (that is actually more than I got last night, honestly though).

Her bag is only 51 pounds. There’s a backpack in there, a tent, a sleeping bag, and a ton of useful crap. I think.

Sending her off. She does not want me to take her photo this early in the morning. I don’t blame her…but there’s proof I got her in the TSA line.

Last night, I guess my brain finally stopped stalling and let me finish the stitch down.

It did not take long…only about an hour over what I’d already spent on it.

Two hours and 13 minutes total…so short on a little quilt!

So then I found some backing fabric…I was going to use something extra and ugly, but I used the full width of a batik for the front, so honestly, batiks are usually the widest…I couldn’t find anything non-batik in the stash that was wide enough. It’s OK…this was a background for some other quilt.

I don’t usually lay them out on the studio floor. I used to iron on it…hence the holes here and there. But this was small enough.

Pinned down…ready for quilting. Maybe tonight? We’ll see. I should have graded something yesterday and I didn’t. Too wired. 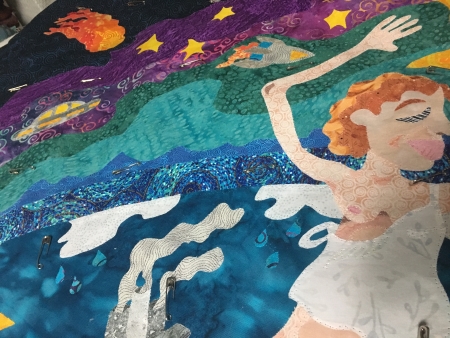 Someone posted pictures of the Threads of Resistance show at the Fuller Craft Museum in Brockton, Massachusetts. The show is there until February 18. I think we’re behind a curtain again…Tanya Brown’s piece hanging with mine (presumably pooping is an issue for little kids to view? Not sure.).

Mine always hang together. I’m not even sure they like each other. They’re all feminists though, so that’s OK.

OK, I’m going to make myself go to school and make sense, or get some shit done, or something. Certainly with both kids gone again, I have fewer excuses. Just those in my head. The commission piece will come back in a bit…so I should be efficient and get the other binding on that other quilt…and get this small one quilted and bound, so I have something done in January. That would be a good plan. Do some of the drawing that’s kicking around in my head. A Frida Kahlo-esque piece of the girlchild is in there…the boychild as well (they love it LOVE IT when I put them in my stuff. Absolutely. Sarcasm there. Lots of it.).