Silly me, thinking I was gonna finish last night…because it bugged me most of the day, way back in the way back of my brain, but I was fairly sure I could make it better. So once I got home and got past the paralyzing exhaustion I apparently caught on the way here, I grabbed a blank piece of paper and traced over the part of the drawing that I wanted to change…

I was trying to keep the original drawing simple, so I only added one target, but then it ended up being on one of the lighter-colored heads, which was silly (but random) and said something I didn’t want it to say. It’s not that one kid is a target in a school shooting…in reality, a lot of the time, I think some kids might be because of bullying (them being the perceived bullies, and perhaps even in real life) or teachers or other staff might be, but sometimes it’s just anger at the whole world and a school has a lot of concentrated human beings so maybe it’s easier to go in there if you need to shoot a bunch of living creatures? Humans, to be specific…you don’t hear about zoo shootings or pet store shootings. I’m not being facetious…I’m serious here. Why does any sane (and that might be the issue) adult walk onto a school campus and shoot unless they feel the campus is part of their problem? I don’t pretend to understand anyone who uses a gun to solve their problems.

I did trace Wonder Under before dinner and a movie (it was one of those nights)…and caught up on three night’s worth of this. I’m behind because I’m doing other art stuff. I did stuff in the bottom left again…filling space…leaves and parts of that vine…

And after the movie (where I was sewing wool bits together)…I ironed. First I finished the thought cloud…but I had lost (misplaced) one of the Es…so this is why I keep my trash pile. It was in there. Duh.

And ironed it together…

Again, making a guess about what’s going through their heads. It’s hard…bullying is a real thing in middle and high school. Kids can be vicious assholes. But it would be nice to live somewhere that the solution was NOT to bring a bunch of guns to school and spray bullets everywhere.

So this was all ironed down already. I was hoping it wasn’t ironed down super hot, so it would still release and allow me to push stuff underneath. Otherwise, this would have been a pain in the ass.

I was still gonna do it though. Luckily, it did release pretty easily.

So I ironed and cut out and then ironed down all these little tiny target pieces…so it wasn’t about one kid with a target that was supposed to stand for all of them. I didn’t want there to be any misunderstanding about the target. Mostly the kids that get killed or shot (and hell, I go back to Sandy Hook Elementary every time…) just happen to be there. Because who shoots kindergarten kids? Because he had access to guns…otherwise maybe he would have done something else, something less deadly. 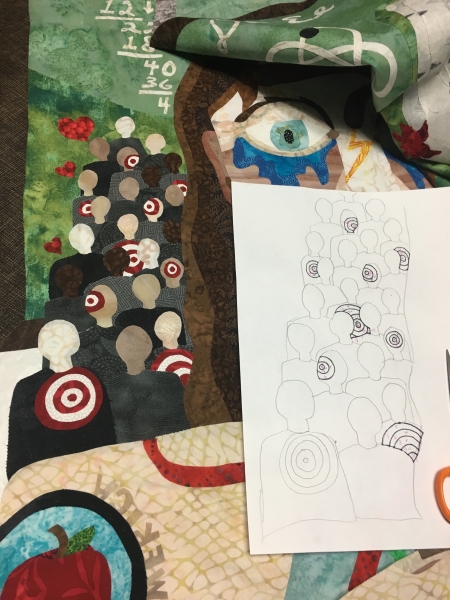 Such a dark place I go to when I work on this. Because as a teacher, I always have in my head what I will do if a shooter arrives on campus…how I will protect a classroom full of 12-year-olds? And if your response is to arm ME? Yeah. No. That’s not a solution. More guns. You want a gun to shoot? To protect yourself? To hunt? Is that more important than a 6-year-old’s life? Tell me that. Truthfully.

No. I didn’t finish.