I started this post two years ago and was collecting links, but really, I should just let it go out into the world…as I tell you about the new show I’m in, Feminism Now. It’s not the 1st, 2nd, or the 3rd wave…it’s just what we are now, and if you’re a woman and you think you should get equal pay and not get harassed when you’re on the internet or out in the real world, for any reason…your clothes, your looks, whatever…then as Maisie Williams offered up, it’s not that you’re a feminist…”I also feel like we should stop calling feminists ‘feminists’ and just start calling people who aren’t feminist ‘sexist’ — and then everyone else is just a human. You are either a normal person or a sexist. People get a label when they’re bad.” And I don’t care if you’re male or female or identify somewhere else, if you don’t agree that it should be as equal as we can get it? Then you are sexist. You are making it worse for everyone with your attitudes. Knock it off.

Here’s the announcement for the show…the opening is May 14, 6-10 PM, at Gallery D in Barrio Logan. It’s during the Barrio Art Crawl, so there are about three galleries just within walking distance of Gallery D and others close by. 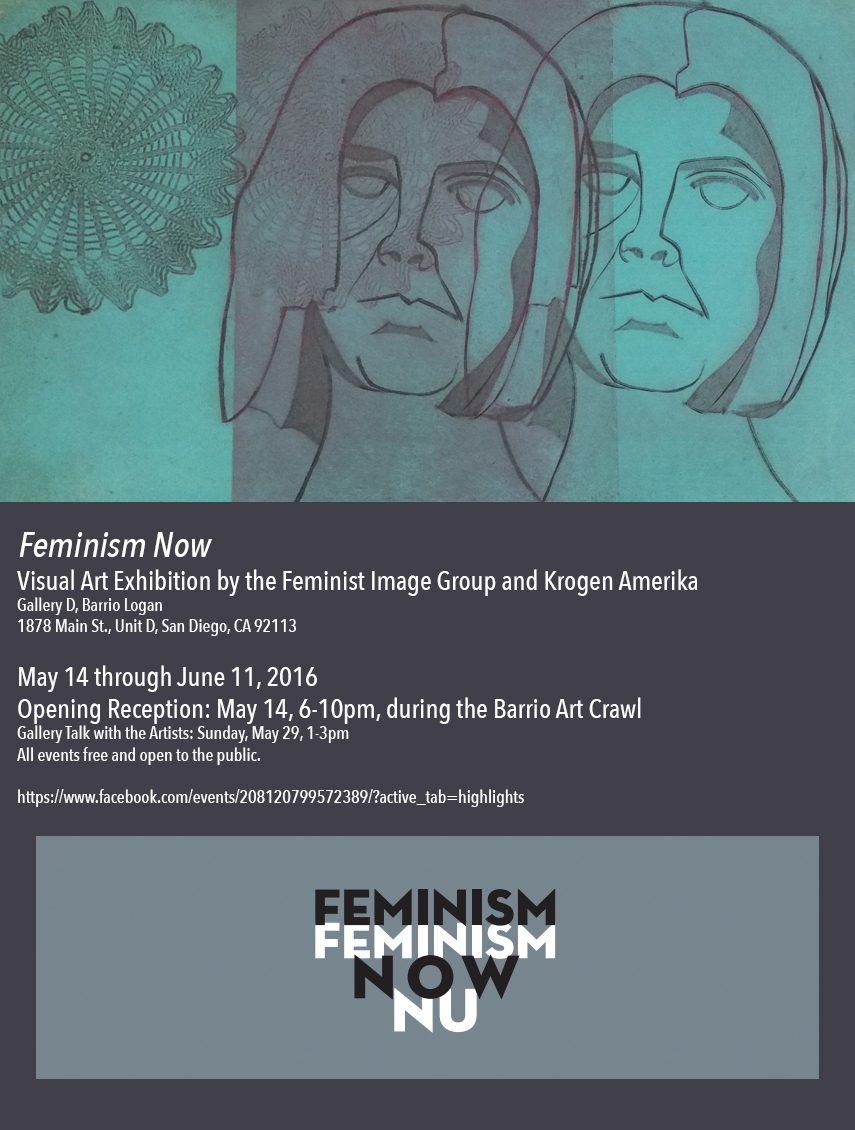 I have two pieces in the show about being a single mom and what that looks like…one from 2011 and one from 2016…the updated version.

This is an interesting article about sexual harassment and geek culture by Dr. Nerdlove.

Here is an interesting article about the role women’s magazines played in the beginnings of feminism. Because I used to read mom’s magazines, Better Homes and Gardens, Good Housekeeping, etc. when I was growing up. And they do make you question how you’re doing it…I’m Womaning Wrong is the basic message I got out of it.

Here is an article about feminism and comics, another issue…”For me, a feminist comic is one in which female characters aren’t just a plot device providing male characters with an opportunity to react. They aren’t a thing to be rescued, fucked, killed and discarded. Feminist comics show women as people, not tits and ass whose stories are only interesting if they’re sexy.” –Casey Gilly, providing a list of 15 feminist comics. And yes, there are way more than what’s here, and I love that we are now seeing choices out there for girls and women to read…because we ARE reading comics and watching sci fi and playing games, and y’all need to get with the program and respect us.

Here is a page Lucy Knisley did about nerd girls.

Here is a BuzzFeed article by Kristen Radtke called Let’s Draw Naked about why we should have more depictions of women drawn by female comics doing things normal women do…so boys realize how normal those things are and stop calling us names for being normal. And now let’s add in ideas of sexuality and trans and gender-queer and accept those in comics and stories and gaming and movies.  And even in toys for kids. The whole Star Wars Where’s Rey? issue. Seriously people. Do you HATE us?

Here is an article about a Gender in Comics panel at San Diego Comicon 2014…and I love the comment that Laura Hudson (writer, “Wired”; former EiC, ComicsAlliance) makes,  “If you’ve grown up in a situation where everything is about you and is catered to you, I think there is a degree to which equality can be perceived as oppression,” said Hudson. “If you’re used to having everything be about you, to some degree, and then suddenly it’s not, I guess in a way you perceive that as oppression.” And in recent discussions about all the superhero movies and how they portray females…sure, some of them are STRONG, but then they’re dead. Or being saved by Thor. Or whatever. Hudson continues, “If you work in the bell factory long enough you stop hearing the bells. I think super hero comics has stopped hearing the bells for a long time, but now you have other people coming in from the outside and [the gender issues in super hero comics are] very apparent. Having the Internet, having these other perspectives that are suddenly in front of us and are not subject to gatekeepers and are far more able to be heard exposes a lot of [these issues].”

Here is a blogpost about how to figure out if you’re a feminist. If you’re still reading, you probably are. If you clicked off and are now swearing about hairy women who just need a good fucking, well, you’re gone, so I’m not talking to you anyway. That’s the problem with talking about feminism…the ones who really need to hear it aren’t listening. Well, except for the boys who THINK they’re all pro-women and talk the talk, but they don’t walk the walk. Their actions show them to be what they really are. They WANT to be feminists, but they don’t have enough empathy with women to actually BE one. By the way, this blogpost is funny. It’s not a test or anything.

Here’s an article about why feminism needs men. It’s fucking annoying, honestly, that we can’t just say, HEY, you fuckwads are doing it wrong without men having to support it for it to be real. There’s one of the major things wrong with society Right Fucking There. That said, if you’re a man and calling yourself a feminist and ACTING like it too (because you can’t just say it, you have to show it), then thanks. At least you’re not one of the bad guys.

Oh shit. Don’t accuse me of hating men. I don’t. I hate power trips and sexism and violence against anyone and I really hate that like over 60 million girls don’t have access to a decent education Just Because They’re Girls. That is truly fucked up. But I don’t hate men. Because feminism doesn’t mean hating men. It means hating privilege and inequality and violence and stereotypes and all that. Are you really gonna say you’re pro all that stuff?

Here’s an article about Anita Sarkeesian and the whole sexism in video games issue. If you’re a man who thinks there’s no problem here, wow. You need to be a woman for a month. Maybe then you’ll get it. In fact, that’s one of the things that drives me nuts. Men who don’t think there’s a problem. Way to downplay my existence, asshole. Why not speak up for women’s rights and deflect some of the rape and killing anger that has been directed at women who dare to criticize the gaming industry. Because I look at all those games and I know I don’t belong, simply because of how my people look when I log in. Even the book from Cory Doctorow, In Real Life, the young girl gamer picks an avatar who is much much skinnier than she is…and why? Because we know you don’t want to look at us any other way but cute and pretty and laughing at your jokes.

It’s not like there haven’t been new links about sexism in the last two years. I think I just got really overwhelmed by the negative vibes towards feminism…especially with politicians and tampons and Trump and pregnancy and my growing invisibility because I’m not a hot 25-year-old (wait. I never was a hot 25-year-old). Coming up next…my women’s art group is doing a show on Sexism in the Art World, and yeah, we’re going after Comicon as well. Because if we keep yelling, maybe y’all will stop. Or start making it all equal. Like it should be. So posting this now…with added content.

One thought on “Feminism? Or Not.”