I realized this morning that my brain has been a week off…well, all week…simply because I forgot to cross off the days of the week on the paper calendar that hangs to the right of my computer. I kept thinking I have more of January…but in reality, January has slipped through my fingers. I’m such a visual person. As a teacher, I write and say the date multiple times a day and it just doesn’t stick until I SEE it. This is one of the reasons I started doing something like a bullet journal this year, although I dunno if it’ll stick. But it helps me to see the tasks and write them out or cross them off, even though I’m using online calendars and to-do lists as well. I have paper calendars on my wall at school and in my office, and a white board-type calendar on the fridge, but I often lose the little tasks, the tiny stuff, the transfers, the payments, the mailing of this or that. I think the weekly thing is helping with that. Maybe. I know for me that writing it down, not just typing it, helps me remember it.

Plus if I’m feeling a little unmotivated to do other stuff, I start drawing in it.

I don’t usually do a lot of color when I draw. Wait. I don’t do any color when I draw. But when I was a kid, the best Christmas present ever was the big pack of 50 different color pens…because all the ones from the year before had dried up, except for the really ugly colors. I find myself buying colored-pencil  or pen kits, even though I don’t color. Yeah, maybe I should color. In my spare time.

I’m still sick. Not horrendously sick, but not feeling my best. Just want to lie around in my pajamas all day and read fiction while drinking tea. Can’t really justify doing that though, because I also want to finish my quilt and get some grading done, because it’s weighing on me. Last night was gaming, though…so I was working on this a little. Just the tree to go really. 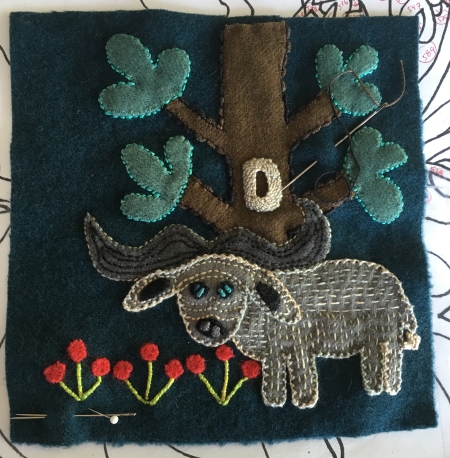 Came home and sat on the couch until I realized I was really tired and should go to bed. The animals are smarter than I am.

I got up this morning and saw this…this is what I want to finish this morning. So I will. 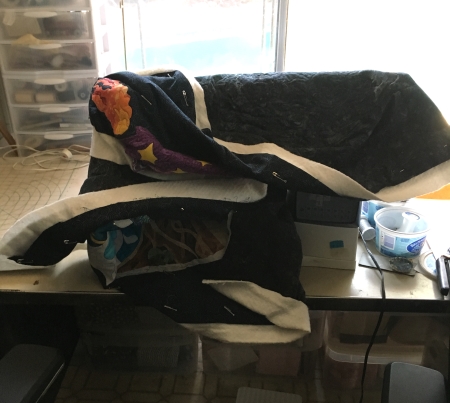 Girlchild was silent for like 14 hours…and I realized she was flying to Northern Madagascar, done with orientation and starting her first home stay and classes. When there’s no wifi, I don’t hear from her. There’s going to be a lot of that. Really, 14 hours is nothing. When she’s in Boston, I sometimes go days without hearing from her, but I see her liking my photos on Instagram or whatever, so I know she’s there, I feel her presence. I paid her parking tickets from school, so hopefully they won’t tow her car while she’s gone. Hopefully her friend will move the car around too. We couldn’t find anywhere to store the car for the 4+ months she would be gone, so this was the solution.

When I was driving to gaming last night, a 20-minute trip I can do in my sleep, I had this idea for a series, but not just my own work…so I don’t know if I’ll be able to ever pull this off, but I like the idea. When reading all the negative stuff toward white women, with the Trump vote and white feminism overwhelming the feminism of others, it’s not enough to say “It’s not ME!” because really that’s irrelevant. The real question is what can I do to (not fix that, because that’s not a thing…I can’t fix it)…to open up the conversation with all women and those who identify as women and those who don’t fall within the two-gender system. I always think of my art as a conversation with the viewers…easier for me as an introvert to talk through my art than to talk in person, I think. So I had some ideas about having a real live conversation with someone who is not a bog-standard cis hetero white chick, like me, but who has a view of themselves that can be drawn…ideally they can draw, although maybe not necessary.

I have this one woman in mind who is engaged in her ethnicity, her color, her race, her culture, and her femininity (honestly, she’s way more feminine…I hate that word…than I ever am), and she draws. And we talk…we talk about our experiences…being a woman in the world (or however she thinks of herself as being in the world) and we draw. You’ve seen my work…I like figure drawings. I imagine she draws herself or a figure that is her, and I draw myself. We surround our drawings with the things we feel about the conversation, about how to find the intersection between our experiences. I listen a lot, because honestly, I know my experiences of being a white woman raised in a fairly affluent community and expected to go to college and following through with that…these are much easier than the experiences of say my female students, who didn’t go camping with the Girl Scouts or to summer camp or to art classes when they were in elementary school or freakin’ tennis lessons (I hated tennis. I sucked at it. But I did have lessons) or cotillion (oh holy crap, another thing I hated). Or knowing you were going to be able to go to college. It’s funny, because I don’t feel like those tennis and cotillion lessons are part of who I am now…but they probably pushed me into what I am. I don’t know. But I feel like if we can talk one on one, then maybe some connections can be solidified. Because it’s true that there is no equality for women unless there is equality for ALL women…and honestly, if we could figure out how to dump this either-or system of you are male or you are female, that would be cool too.

So she draws her figure and I draw mine, and we try to draw some intersection between the two. Then honestly, I want to make a quilt out of that. But I wonder if that is my taking over her image, and I don’t want to do that. I could teach the process and let her create her half…I could do the drudge work, the cutting, the ironing, the quilting. Or I could have her color a cartoon and then follow that when I iron her side to fabric. Or have her bring fabrics to the table. Some of this may be overwhelming to someone who doesn’t create similarly to me though…I don’t know. Maybe even just asking for the figure is too much…although I’d be totally OK with having this conversation and both of us drawing and then maybe coming back together and they have this painting or drawing or charcoal or sculpture that is their version and doesn’t even have a figure in it, but it sits/stands/hangs next to mine. I do want some sort of intersection though, some connection, some place where we come together. So that’s part of the conversation. Where do we intersect? Where do we have things in common? Where can we live and converse and support and create a better, more inclusive world?

Anyway. It’s in my head. Maybe it will become something real in the next year. I do know that even if all I had was a drawing and I did all the fabric choosing and ironing and quilting, it would still be a piece by both of us. Owned by both of us. Then maybe it can go out there in the world and speak to both sides. If there’s a lack of understanding, maybe the viewer connects with one side and can try to see the other side. If that’s a problem…and I think it is. It might even be worthwhile to try to find some white woman who voted for Trump and would be willing to have that conversation with me and draw with me. That might be the hardest conversation, because this is about empathy in many ways, and I have a hard time holding on to empathy for a group who seems to inhabit hate for others as part of their existence. But I realize some of that is my misunderstanding of why they voted the way they did. Change is hard. Change is scary. Some of us embrace it more than others. Some of us jump on its back and ride it into the sunset. Some hide in the closet.

Of course, there’s a strong possibility that my idea is just more white feminist trying to fix it all. Hence the need for conversations.

But today? Today I’m going to finish quilting this little piece. And hopefully the cold meds will kick in. And maybe I’ll draw some stuff. I’ve only got about 17 drawings in my head right now.

I have been grading every night and I’m not done. And for a little while, I let myself draw. Which is how I ended up with that woman licking an arm. #drawing
Well that got ugly...this is really for everyone who knows what they’re drawing before it spills out of the pen. (Not me). #drawing