Been up all hours now. Stayed up too late finishing the cutting-out stages on the quilt. Then up bloody early cuz I couldn’t sleep, plus some crazy person drove from Long Beach to buy my serger in the early dawn. I don’t serge. I also don’t early dawn. You don’t even know what a serger is, if you’re one of my non-sewing readers. Do I have non-sewing readers? Probably a few. I can’t even thread a serger. It takes 5 YouTube videos to thread a serger. Certainly not happening with the brain power I’ve got at the moment.

The Don’t Shut Up show is down. I got to leave early to come home and spend two hours writing the blogpost for it. You can see that here, if you didn’t go to the show. Shows are a lot of work, even when you’re not in charge. I still need to suss out the videos I’ve got and post about the artist talk, but that’s not happening today. Straight up, I need a break from all the cleaning and doing shit. Which is silly, because it’s not like I’ve been doing it full time or anything, but it just gets very overwhelming to have to make that many decisions about what to do with stuff and/or how to store it or get rid of it. I found a cardboard box full of silverware yesterday. In my bedroom cupboard. I didn’t even remember its existence. They’re not solid silver, unfortunately, because then maybe I could pay somebody to clear all this out, but they’ll supplement my stash. My eye is twitching again. The internet is ever so helpful. Causes are stress, fatigue, and caffeine. Well yes. I do have those. Thank you, internet.

Anyway, I will deal with the hangers today, but I’m not planning on a lot else. Well, there’s the pile of clothes I just dumped on the bed. More to go through…aaargh.

So yeah, I stayed up way too late last night because I just needed to be done with the cutting out of tiny little pieces…

See…there’s someone who knows how to sleep properly.

I finished cutting stuff out sometime after midnight. I think it was about 13 hours total.

And then early this morning, while waiting for the serger woman to show up, I negotiated space on the light table with Kitten…

Apparently it’s her table, not mine.

I just worked around her. Like I always do.

I was visited by a hummingbird.

So this took two hours…and most of the last hour was sorting through pieces like in the bottom box. Tiny pieces. Crazy pieces. Who the fuck thought this was a good idea? 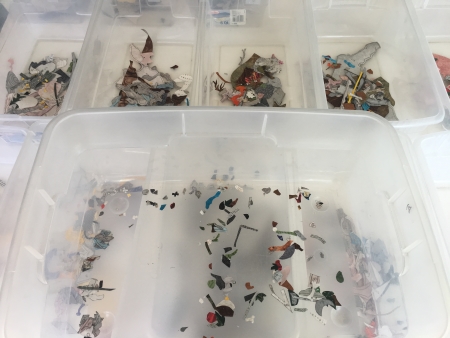 These pieces are either missing the paper or missing the fabric. Not bad…and that piece 485 is either the gray or the red. I’ll figure it out when I iron it all down.

Fourteen boxes of pieces for today’s ironing pleasure. If I can wake up enough to do that. I have shitty role models around me, all of them asleep. Think I’m going to go take a nap with the clothes on my bed. They probably won’t bug me too much…then maybe I’ll be able to iron for a while.

*Siouxsie and the Banshees, Kiss Them for Me