So AQS finally felt enough pressure (thank you all) to make a statement about pulling my quilts (although they only talked about pulling the one). I’m confused because it doesn’t match anything I was told. Well, except that they removed it. The statement is below…I’m not exactly sure where it’s posted in real life, because it wasn’t sent to me by AQS. Nothing has been sent to me or communicated to me from AQS directly.

“After receiving numerous complaints from attendees about a quilt in the SAQA exhibit, AQS removed the quilt from the People & Portraits exhibit at the Grand Rapids QuiltWeek event.

Prior to removing the quilt, the feedback AQS received was not limited to one isolated comment. Attendees reached out to AQS staff at the show and via emails and phone calls to our office.

Despite the removal of this quilt, AQS was able to display more than 700 other quilts at the show for viewing by the general public in Grand Rapids.”

This kind of thing makes me sick to my stomach. I’m amazed by their disrespect toward me and SAQA. And I’m worried that this will hurt me and other art quilters in the long run. I wonder if there were no comments during the other four QuiltWeek events or if I was just kept out of the picture. I remember the feeling in my gut when SAQA told me this exhibit was traveling with AQS. I think I have quilt show PTSD at the moment. So I guess any traveling show I’m in, my work will now get pulled if it goes into one of the quilt show circuits. Thanks to the Mancusos for not reacting that way back in 2011. Appreciate the respect.

Here’s a post by Virginia Spiegel that explains why I haven’t been sleeping for the last week. As I’m sitting here working on the next “controversial” quilt, I’m wondering how this is going to affect me. I have a piece in SAQA’s Turmoil exhibit that will hopefully travel after it shows in IQF Houston this year. Or maybe it won’t. I’ve already been warned that my Earth Stories piece might be too controversial and pulled from some venues (it deals with free birth control and Planned Parenthood, giving women who WANT it the power to control how many children they have and how often).

Will the work I’m making now ever be in an exhibit? I hope so. But if it’s not, I blame AQS. I blame the woman (what I was told in the beginning) who saw an imaginary penis. Shit. I blame the country’s attitude toward women at the moment and controversy and anything that isn’t pretty. Don’t get me wrong…I love me some pretty art and beautiful quilts. But that’s not all there is.

I really really tried last night to get my head into art so I could sleep. The last part was a failure, but I got a lot of ironing done (and know that there’s some shit at school as well right now that is incredibly overwhelming and stressful, so that’s not helping with the sleep part.). 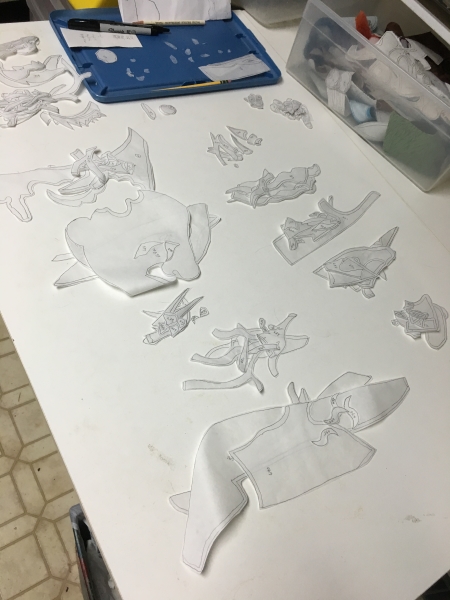 When I’m dealing with figures, I try to do all the flesh pieces at the same time, so I know what is what color. This is the 2nd figure, the one in front. Some people are going to look at her and be disturbed. AND THEY SHOULD BE. That is my intent. 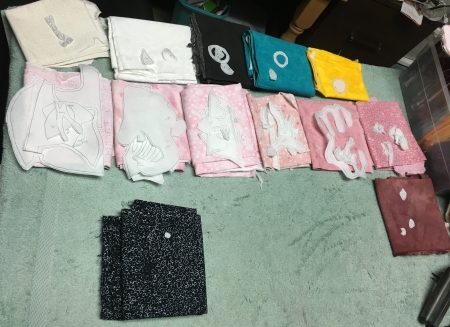 Then I laid out the 3rd figure, who is just behind the 2nd one, so mostly hidden, except for head and shoulders. 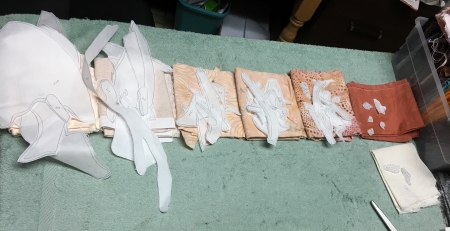 I haven’t ironed all the inner non-fleshy bits though…I still have to do hearts and lungs and hair and anything else that wasn’t basic flesh color. I’ll do some of that tonight, I think. 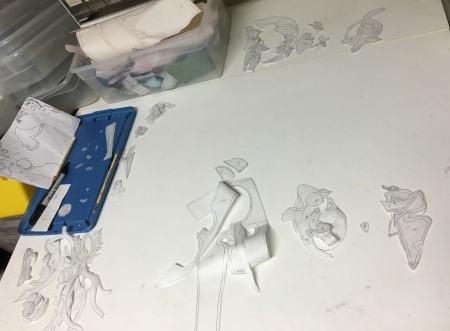 I’m in the 700s, but there are probably close to a hundred pieces that aren’t done prior to that (hearts etc.). So maybe halfway done. Shit. It’s taken 11 hours. Not a fast process, by far.

Here’s what I’ve used so far…lots of flesh colors. The pile that’s not in the boxes is for the last figure, who does still have arms and shoulders and head showing. 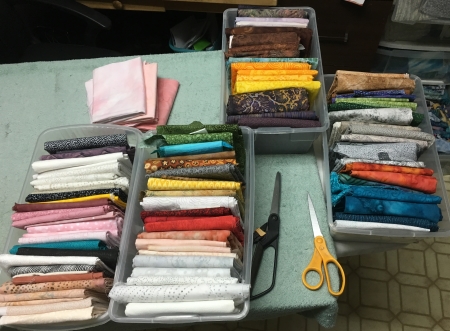 Here’s what I have ironed down so far. 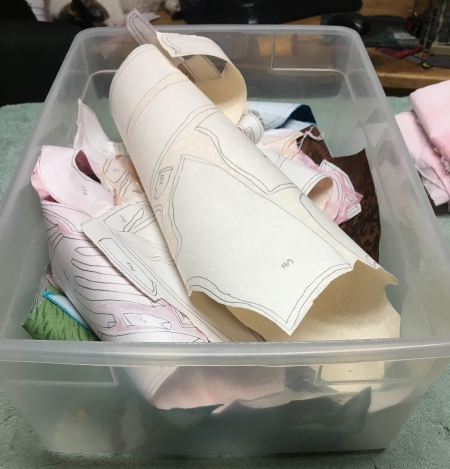 I’d like to be done with ironing them down before the weekend, if not before, but I’m not sure I can do that in two nights. Not if it’s another 11 hours. I did iron for 3-plus hours last night. I kept waiting to be tired. Honestly, I was also watching the last episode of Happy Valley and couldn’t stop. Great show.

On top of this, I’m currently dealing with an extra dog. It was more than I needed yesterday. It took two of us humanoids to manage dinner, and I won’t have that help for the next 4 days. Too much stress. Maybe they’ll be more mellow tonight. 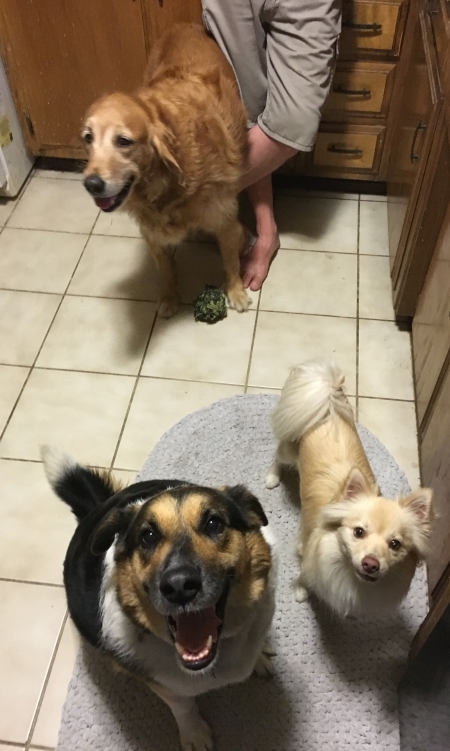 Kitten is fine though. Irritated about the extra dog, because she’s a cat chaser, but… 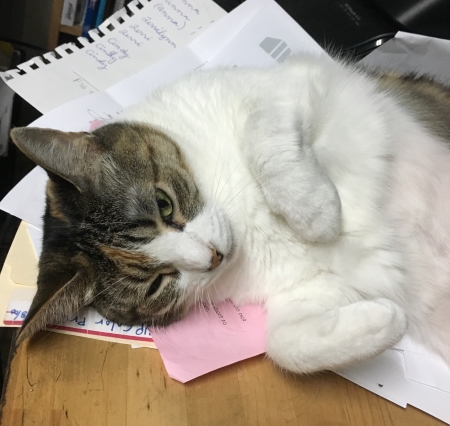 She loves me even though I brought the interloper in.

Shit. This week. This month. I’m going into full hermit mode soon. OK. Maybe I’m already there. I hear all of your messages though. I’m trying to NOT hear all the other messages out there in the world.

*Roxy Music, More Than This