So the plus is I worked on grading stuff and prepping lessons for about 6 hours yesterday, so I could go out to the living room and finish that tiny little drawing that is now going to kick my ass for the next (shit, count them) four and a half weeks. Damn. I thought I had 5 weeks. OK. I can do this. I think I did the last one in that amount of time, oh wait, no I didn’t. I started tracing Wonder Under on January 10 and finished February 21. OK. I see. Well this one is much smaller so hopefully everything will take less time. Or more. Plus Spring Break is in there. That should count for something.

I got interviewed yesterday for a local newspaper and he asked what I was looking forward to, a project or piece, and I said I was looking forward to working on a piece just for me, one that I wanted to work on that wasn’t for a particular show or theme. And that’s true. But if I want my work in shows, sometimes I have to work like this.

So Saturday, after grading, I had a couple of hours to work on the drawing. I did go in with pencil and do the main parts of the two figures. And that bird at the top? I ended up erasing it and moving it before I inked. Usually I just go for ink, but this one is small enough and fussy enough that I didn’t want to mess around with…well…messing it up.

I love the late afternoon blue tint there.

Saturday, I started inking the top figure, which is male, despite the long hair. These are my kids. Then I kept going on Sunday night. I moved the bird down and closer.

Then I turned the drawing upside down and did the other female, the girlchild. I’m still debating the empty space in front of her face.

That’s one of my problems…that the empty spaces kind of bug me. You might have noticed. She has a knife because she’s a damn good cook, not because she’s a serial killer.

Someone emailed me about one of my pieces that was in Florida this last weekend and her interpretation really threw me…not in a bad way, but she’d taken the title to mean something different than what I had, and it threw a new interpretation on the quilt…but it wasn’t an incorrect one. In fact, I quite liked it. So this is why I explain the knife. Although there’s also the meta-interpretation of daughter and knife with mom, because that relationship is often a dicey one, as mothers and daughters throughout the ages can attest. You love them but there is a struggle there. 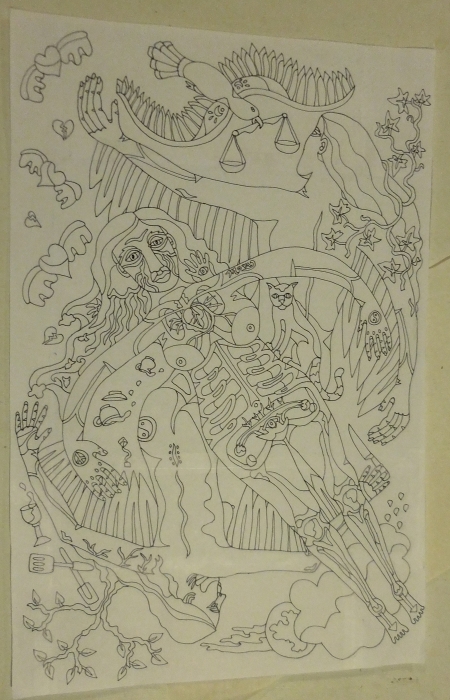 I think it’s done. I may change my mind. I like to let them sit for at least a day before I start the next step, although with only 32 days, I don’t have time to sit for any days. Besides the first bit of drawing, the main part of the center female, the rest took me about 4 1/2 hours to draw. It’s always longer than I think it is. I think I can bang out a drawing in an hour, and sure, I can, but mostly it takes longer than that.

What I should have done at that point is go to bed, but if you’ve been reading here for more than a week, you know that’s one of my weak points…knowing when to stop.

So I numbered it.

And yeah, I went to bed too late. With age comes wisdom? Well, yes, in that I know that it’s numbered now and I can get on with tracing it tonight with very little brain power. Awesome. But maybe not so much feeling wise this morning with my brain in mush state as I go to work. Whatever. I always wanted to be one of those crazy old ladies.