I wish I were more organized some days. I wish everything was filed in the right place and the right order, that everything I needed was easy to find and right at my fingertips. But that would be more time taken away from the stuff that keeps me sane, like artmaking and exercise and spending time with people. There just isn’t enough time to be that organized. So that whole roof leak thing…need to find a piece of paper, maybe two, from X number of years ago, with X less than 10, but more than 5. I suspect my parents have a file somewhere labeled “roof”. Actually they probably have a “roof” file for all the houses they own and maintain. I however am not that organized. I have a file labeled “house” which is pretty efficient in itself, but the roof stuff isn’t in there. Because I never got around to filing it. Because I don’t have time. So it’s in the pile labeled “to be filed”…and that’s a pretty ugly pile.

So I’m going hiking this morning with the kids instead…last hike before they leave. You could argue my priorities are weird, but there really aren’t enough hours in the day for everything, and I obviously choose some stuff your average chick doesn’t. I spend a lot of time making art. Yesterday was 4 hours on a binding, although almost 2 of them were while I was hanging out with friends. That’s pretty rare. Most of my quiltmaking activities are solitary, not transportable. Sometimes there are people in the house when I work, but only when the kids are around really. That does actually make it easier…the human presence and sounds and occasional interactions. Because sewing the binding on is kinda boring and repetitive and doesn’t require much brain power, it’s really easier with people around.

That said, I finished. Bathtub 5 (which needs a real name) was done as of last night. 68 hours total. Started a little over 2 months ago, besides the original drawing, which was done April 20, 2015. I added some stuff to the drawing once it was enlarged in early November.

I had emailed the photographer yesterday about photographing it tomorrow…thus forcing myself to finish. Because it wasn’t as high a priority, but it will be easier to get it to him this weekend than next, and it has to get done soon enough.

I also started going through the existing quilt stash figuring out what can go to the Grossmont show. Some of the newer stuff is already spoken for. Bathtub 2 (aka In Deep) is going to Ohio for the Artist as Quiltmaker show there…

So I can’t hang her. I can’t hang anything that might get into a show before mid-March…and I have three entries planned for the next two months. So that takes up some of them.

So I started by going through the pile on my dresser, which needs to be put away. Then I pulled the three large rolls of quilts hiding in my closet and the girlchild’s closet. I went through each roll and pulled anything I thought might work. And piled them on the lightbox. 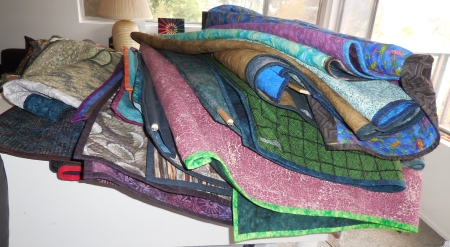 Some already have dowels or slats, which is good, because that’s my next job. The one I was supposed to do like Tuesday.

We met, the two artists and the curator, back in November? Or something? And she gave us this gallery map and we talked about where quilts would go and where sculpture would go…

And list everything and then I get overwhelmed, because it is an overwhelming thing, and I’m not sure how much space to put between them. I suspect it’s more than I think. I don’t want to take too few pieces, but I also don’t want to take way too many. So yeah.

She got it right. Anyway. So that’s where I’m at. Kids just showed up and we’re going hiking, even though Dad wants me to find the roof paperwork like right now and all those quilts need ironing and stuff and I probably need to do school stuff and grade and holy crap, I need to work on the new quilt too.

One thought on “Later…”