So I had about 45 minutes free after school yesterday, and by free, I mean I had 78 things to do and I picked one of them, notably cleaning out the boychild’s room because as of 8:30 PM tonight, he’s home in 2 weeks (holy shit, time flies). So I panicked a bit and got some stuff moved out that I had organized before but just hadn’t found a home for, and then started going through the immensely scary pile on the bed. It’s scary because I’m not quite sure what to do with it. There’s a quilt in there that I finished years ago but don’t like and think I need to paint over, although after looking at it last night, I’m not even sure it’s worth the time. I spent hours on it, but I just don’t like it. Strange for me, but it was an early quilt. I think I was still married when I made it. Divorced in 2002, by the way (well officially later than that, but 2002 in my head).

So I am in a quilt guild that I hardly ever go to, just because it’s Monday nights and honestly, they used to have interesting speakers, because whoever was in charge had a contemporary leaning, but now it’s mostly traditional stuff, so I don’t go more than about once a year. Anyway, they would give out a pattern in the newsletter and if you brought in a block (or 10 blocks) in that pattern, you could donate them and one person would win all of them and take them home. So I thought the pattern was interesting and made a block. But then I didn’t go to the meeting. But I made more blocks. And I suck at piecing. Do not look close up at this thing. And it’s really not big enough for a lap quilt…it works for me because I have a small lap, but I think I made it to cover the back of the couch I no longer own. Anyway, I found it in the pile, and I’m like, why is this here? It looks done? There were about 15 inches of the binding that were not sewn. You know what I did last night? I sewed those inches and then put the blanket over my feet. As I turned the thermostat down again.

I do know HOW to make traditional quilts. I just don’t. Usually. Baby quilts. I don’t know how old it is…if it predates the divorce, and I think it does, it won’t be on the blog. So let’s say before 2002.

Then I found this…which I really like. And I know where it’s supposed to go.

My quilt teacher and friend Susan had this quilt she made off a drawing she did from some textile her parents gave her? She’ll tell me if I’m totally off with this. Anyway, I always liked it and so I got the pattern from her and then did it in entirely inappropriate colors (hers is all nice earth tones. Or maybe the original is. It would make sense if hers were all in purples). See, I know how to applique (I found all the blocks to two applique quilts that need to be sewn together). All this needs is a good border and to be quilted, and it’s not that big. And then I could hang it where it belongs. I also can’t date this one, although I think it’s post divorce…so it might be on the blog way back when. I started blogging in 2004, but had to migrate and not all the pictures came with the migration. Based on what I just found in my picture files, it looks like 2006. Maybe.

Then I found this…and this has been floating around the studio for years.

When I first started making art quilts, I did a lot of hand applique. Now I’m good at it and fast, but it takes FOREVER to make an art quilt with hand applique. A few of the early ones are just that and they are small and took me months. So that’s why I started taking all these classes, trying to figure out how I could do bigger faster. So this one never got done…here’s the drawing, which I was looking for… 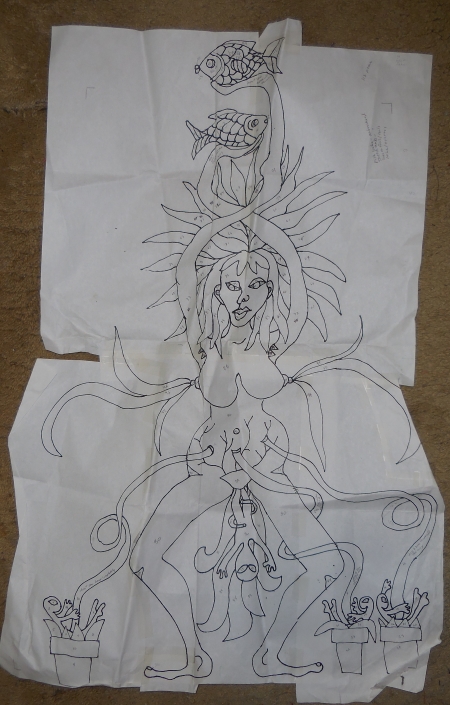 No date on it, but I can guess early 2000s, probably pre-divorce, because I know in late 2000-2001, I finished one small hand-applique art quilt and then started fusing them. So I suspect I started it in 2000 and then didn’t finish. Honestly, it’s almost done. Sure, it’s weird. But all my quilts are kinda weird. It feels like she deserves finishing. And it’s small…ish.

I feel like going through these piles that I want to finish those two above. One just because it’s nice and brightly colored and will be easy enough to finish and then I can brighten the house with it. The other, just because she’s waited so long and it’s a bit different from what I’ve been doing. Not that I’m advocating going back to hand-appliqueing art quilts, because that’s just fucking crazy. Yeah.

So that’s where I’m at. I didn’t make art last night, but I did make a dent in the pile of stuff in here that needs to shift so I CAN make art. That’s all I can apparently handle at the moment, which is too bad, because I’ve got some major deadlines piling up here and I need to get my act together. Ha. This is not the time of year for me to apparently do that. Sigh. I will keep going through the memory pile on the boychild’s bed though…it’s like an anthropological dig through Kathy’s art existence. Plus I suspect someone will want to sleep there soon enough.

One thought on “An Anthropological Dig…”