Wow. I think this is the longest I’ve gone without posting in years. In my defense, my cellular connectivity has been iffy as hell, if not nonexistent, for much of this trip, and when I did have it, I was busy doing something else or totally exhausted after hiking over 11+ miles a day. I realize that’s not much to some, but this old body has been running on little sleep, weird food options, and lots of climbing around for days now.

That said, it’s been freakin’ awesome…a mind-blowing trip of all the different geologic formations you can get in two states (Arizona a little, but mostly Utah). I think we both decided while huddled in the tent last night during a rainstorm that we were done with camping on this trip, though, as we pinky-swore to wake the other one up if we heard thunder, so we could race to the car before lightning hit the aluminum connectors of the tent. Or the ground.

So this is the short version. We left last Wednesday on a long drive to Zion National Park. We originally had a reservation for the east side of the park, but they closed the road going through on April 9 to fix storm damage this winter, so I found a weird but functional place on the west side in La Verkin about a week before we left. It had a kitchenette and shared barbecues, so we used those (yes, even for pre-hike breakfasts of sausage and eggs). It’s Spring Break for about a million people, quite a few of them from other countries, and they all had the same plan for visiting Zion. We went in to the park that night to plan the hikes for the next day. We also did the Archeology Trail as a warm up for the next day…and saw our first wildlife.

We got our butts up early and headed out to garner a spot in the coveted Visitor Center parking lot (you don’t wanna know how early), and then caught a shuttle to a hike I said I’d never do: Angel’s Landing. It was still morning cool, which is a good thing, because that climb and the Walter’s Wiggles with 21 switchbacks (it didn’t seem like that many) is not something I would’ve wanted to do in hot sunlight. We didn’t do the last stretch that’s single file and a chain attached to a rock wall, but we did go all the way to Scout Lookout. Some might call that chickening out…I don’t care…we did awesome.

From there, we caught the shuttle and did all the things we wanted to do…part of the Pa’rus Trail, the Lower Emerald Pool Trail (Upper and Kayenta were closed due to storm damage), Weeping Rock, and the Riverside Walk out to where The Narrows starts (also closed, because the water flow was high from Spring melt and rains). At that point, we’d had it with crowds of people and their bad tourist behavior. The Angel’s Landing crowd understood trail etiquette and were amazing…the shorter hikes? OMG. People. Really. So we headed back to our domicile and another barbecued dinner. We did a lot of miles that day…my app says over 14 miles that day total.

Friday found us driving to Bryce Canyon National Park, where we camped outside the park, because everything else was first come, first served, and we didn’t want to risk having nowhere to stay. The campground at Ruby’s Inn was quiet and the showers were free and hot, and it wasn’t as cold at night as it was originally supposed to be, but it was still pretty damn cold. We got there pretty early on Friday and set up camp, and then headed off to Bryce to check it out. I’m glad we did, because we saw a bunch of the easy stuff on Friday, thus allowing us to do a really long hike on Saturday without feeling like we had to then go look at everything else. There was snow at Bryce, most recently from like 3 days ago.

Sleep was not our friend Friday night; it was just too cold. Nevertheless, we got up early again and headed out for the Fairyland loop, which goes down into Bryce and wanders around, then climbs back out (oh yes, at elevation No Oxygen for You), and then traverses the Rim Trail back to the Fairyland parking area. Wow. Great hike, but we did way more than the 8 miles it claimed.

We figured a better sleeping plan on Saturday night (towels on top of the air mattress to stop the cold seeping up from the ground, even though we had a tarp that was supposed to help with that, plus three layers of clothing, and wool socks, dammit, because cold feet were an issue the night before), and got out of bed early again, expecting (rightly so) a long driving day.

We made it through parts of Grand Staircase/Escalante National Monument and then Capitol Reef National Park, and finally headed into Arches National Park in the late afternoon, where we actually had a reserved site. At this point, it was Easter night, and there was no firewood or alcohol to be had (both useful for keeping moods light after a long hard day of driving, plus trying to pound tent stakes into hard rock), so it was not the best night, but the morning dawned ready for a day of hikes. And hike we did.

We were camping in Devil’s Garden, so we started on that hike, although we turned around at the rock scramble where I was like um no way, can’t do that. So we then drove through the park, stopping at just about every possible sight, attempting one longer hike at Park Avenue (way too hot in between the rocks). We made a quick trip into Moab for alcohol, ice, gas, and firewood (the necessities), but then continued on to see the rest of the arches and other bits. We made it back to the campsite, and set out on a trail marked by rock cairns to see three different arches. I think that was what put us over 11 miles that day. Awesome views though and mostly avoided stupid people.

We had decided to treat ourselves with dinner out (there’s only so many camp meals we know how to make before wanting to drown ourselves) , so we headed into Moab for burgers and beer (or wine, as you prefer). On the way back, in the pitch black, a rainstorm wandered in and we white-knuckled the drive all the way through the park to the campground, watching lightning strikes out there in the clouds. The campground was dry as a bone, until about 5 minutes after we arrived, when the raindrops started…and then the wind. Holy crap, everything in the car or the tent, no fire tonight! In the end, we were so tired from the day of hiking that we went to bed, no thunder ever sounded, and we slept really well. Not too cold, just right, so tired we didn’t mind any of it.

There was no cell service in our campsite (further up the hill had it, but they also probably had a rougher night with the wind and the rain), so we had mapped some ideas out at dinner in Moab. Canyonlands was a possibility, but in the end, we decided to brave the crowds at the Grand Canyon. We left Arches this morning and drove through Monument Valley (we didn’t go through the actual park…that’s for another trip) on our way to Tuba City, where we actually booked a hotel room. With a shower. Because there weren’t any in Arches and I think we really needed that. So we’re clean now and have a crazy plan for tomorrow, I had my Indian Fry Bread and retraced the most recent embroidery…more about those and the daily (almost) drawings in another post. Grand Canyon tomorrow and then heading back home. It’s been a whole lot of wow and hiking our old asses off, but I think it’s been an amazing trip so far. We have a pact for tomorrow to leave the park when one of us feels like pushing someone over the rim. We know this will be just a quick view of the park, and we’ll plan another trip later. 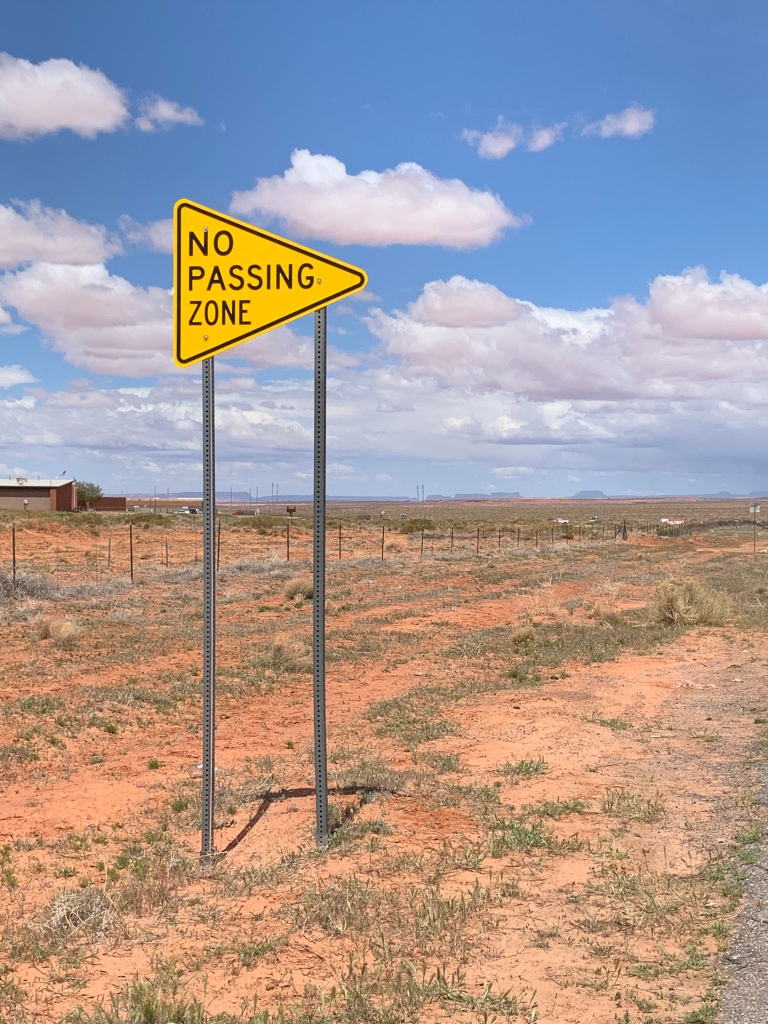 I have graded nothing. I have dealt with very little email, due to lack of access. The world is still rotating, though, and that’s a good thing.