I need to go buy more Wonder Under this morning, because I used about 5 yards of it yesterday and I’m going to run out. Some days, I find it hard to make any art during the day. It’s too hot. There’s too many errands or other distractions. Need to shower, need to eat, need to go to work…but during the summer, I don’t seem to be any better at it. It often takes me until mid-July to hit my stride. It’s like my brain doesn’t really believe it’s vacation until someone says, oh hey, there’s only four weeks left. Aack. There’s all this shit still on my to-do list dammit. And I’m still on call for jury duty. Damn them. But the panic started…the one where I realize how many days I definitely won’t be able to make art due to people visiting, being gone, or pure exhaustion from school shit. So if I want this quilt to be done, I need to get my act in gear.

So I traced Wonder Under for almost 9 hours yesterday. Seriously. And I was antsy about it. I often am. I made myself go for an hour before I was allowed to take a break. For anything. Because I’m the queen of making excuses to wander off. And eventually, I kept coming back…because I set a daily goal (one I probably won’t meet today…exigent circumstances). I wanted to get a third of the way through, so about 600 pieces. And I did that.

It’s not a small drawing. It’s draped over the light table and the couch (note puppy asleep on the couch back, just under the window).

I was trying to keep this thing simple (ha!), so there are a lot of big pieces that don’t necessarily save space on the Wonder Under.

So they take longer to trace (longer pencil line) than the small pieces. Hence 663 pieces in almost 9 hours. I usually average about 100 pieces an hour. Not so much yesterday.

I have lots of animal interactions…

When I’m taking a break, it’s really just to refocus my eyes and sit down for a bit, because I trace standing up and it’s hard to focus on that stuff for a long time without a break. So I walk around and sit for a while and go pee and make some more tea or eat something if it’s time to do that or go walk down the driveway to get the mail.

Or watch the puppy sleep.

During one of the breaks, I straightened up my desk. It was a disaster. It still kind of is. I need something to put the scissors in and the pens and pencils I’m using right now. I have another container, but it’s already full. I’m not good at getting rid of marking implements. I don’t think that box is best for that. You can see one of the traced yards there…don’t think I can fit any more on it.

I don’t know why I keep those scissors. They’ve been gnawed on. It hurts to use them. I think it hurts more to throw them away.

More Wonder Under piled up on the drawing…

I started around 11 AM and finished after midnight the next day. I’ve got about 5 yards in process of being traced. A lot of big pieces means having to start a new yard before the other one is full.

Anyway, more of that today, although I’ve got two errands to run this morning and a quilt meeting this afternoon. This thing is way too big to bring with me, so I’ll probably bring some Wonder Under to cut up and maybe some wool stuff. Then I’d really like to go to the gym tonight or tomorrow. There’s other stuff I need to do, but I often get into this artmaking mode and then I can’t do anything.

More distractions…puppy in a box.

There’s this too. This is one of my favorite tops for work (for winter) and I accidentally got bleach on it (dumb move). So I don’t want to dye it. Too hard to match. Then there’s pens…but again, it’s a weird color (Sharpies are useful for black though). So I’m considering embroidery. Except what? And how? It would have to be more all over or viney stuff. So there’s that. I’ve got some time to deal with that. 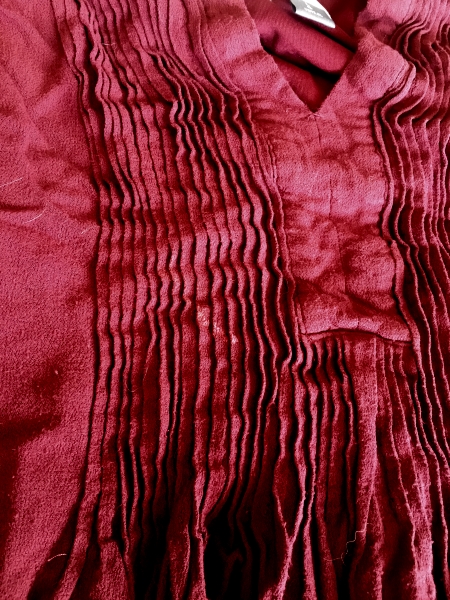 The blog title is one of the things I need to buy. I didn’t even know that’s what it was called. You learn something new every day.

Bound and ready for photography. I drew this in my head while he was still on the trail. Hoping he gets to finish next year. The Pacific Crest Trail is hard on those who hike it, but it’s also hard on those left behind. Here’s to documenting that. #artquilt #quiltart #pct #pct2021
Desert Bunny will be going to Art Quilts XXVI: Stitching Stories in Chandler, AZ…with another of my pieces.