Interesting conversation online came up yesterday about feminism and quilts. A quilt teacher mentioned that she had never heard her students discussing feminism and quilts (she should hang out with me and my quilter friends, I guess) and a whole bunch of women claimed feminism is politics and/or man-bashing and there shouldn’t be politics in quilts. Um. Why not? And feminism is not about man-bashing…I think men are just fine. I just want equal rights for all versions of gender and color and culture and ethnicity and whatever word you would like to put in there, but I also think ALL of that belongs in quilts. It doesn’t HAVE to be in quilts…but why would we say it can’t be there? So many rules. Sigh. The one I’m drawing (mostly in my head, honestly, because yesterday was not a drawing day and today probably won’t be either) is all about feminism AND politics (they’re not the same) AND it will be a quilt. Because that is my chosen art form, and I especially like that I use an art form that used to be only made by women who needed things to keep them warm and they wanted them to look interesting (not just pretty).

I guess I just don’t understand why if you don’t like something like politics in quilts (can you say Threads of Resistance?) you don’t just WALK ON BY. You can chat with your friends and say, hey, I didn’t really care for that exhibit that was all political, but I do love me some Baltimore Album quilts…did you see those? (By the way, I love me some Baltimore Album quilts, for realz.) It’s not hard to be civil and allow others to express themselves differently than you do. And that goes for their relationships and marriage and how they dress and how they live and who they love and how they love. But that’s just me.

And me today? Got a lunch date with an old friend and then the man who lives here, his band has a show tonight, so I have my table reserved for some food, wine, and musical drawing. Sounds good…hope it turns out that way. That’s the plan anyway.

I got very little done yesterday. It was just one of those days. I spent about an hour going through the quilts in the boychild’s room, rolling up one grouping, pulling 6 that are shipping out. I still need to find 4 little ones that are supposed to ship out as well, but this was a start…

It’s a good thing I did that, because he’s on his way back. I still need to move the roll where it belongs and actually SHIP some of these…some I just rolled together, because they won’t ship until August, but I don’t want to put them back in the big roll.

Then I was fussing around doing some other stuff, ran some errands, bought more thread, worked on the quilt under the machine (not an art quilt…just needs to get done) and realized these guys needed exercise. Hence the sad faces…

So we walked them…

And then we went out and watched a band and ate some dinner and came back to this HUUUGE beetle thing on the window screen. I’ve never seen one of these…a gecko came by and thought about eating it, but it was bigger than his head, so no. He left. 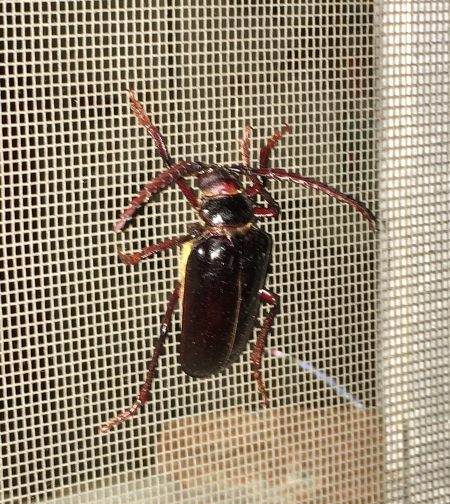 We are surrounded by wildlife.

This is Simba this morning. He had a huge tick on his chin (yes, he’s on meds to kill ticks? I don’t actually know what it does to the ticks if they bite him…), but he’s off to play now at the other house. 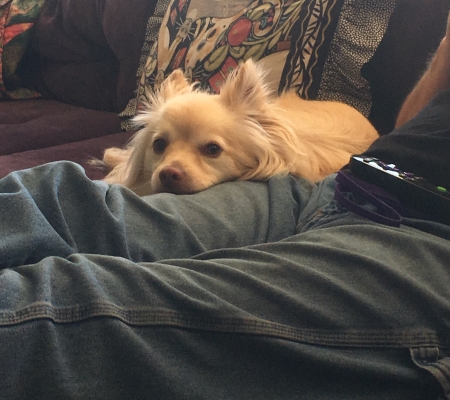 And I need to get off of here and get ready to go to lunch. I’m hoping to come back and work on something later…whatever that something is. I feel like this summer is so discombobulated. Oh well. At least there’s nothing to grade. Because I’m mostly brain dead right now.