I have these goals to go on long hikes on the weekend or go hang out at the zoo (new passes for Christmas) or sit down on the deck and do a new drawing (that’s a perennial goal for me), but often it just ends up being the grocery store and the compost bin and maybe laundry if I’m really organized. I have two openings coming up in LA, and the thought of having to drive all the way up there and back in a day is disheartening…although I’m gonna do it. Twice. Which means having to plan ahead for the school stuff I normally do on the weekend.

It’s not that I’m not getting anything done…I just always want it to be more. And I forget how much energy school sucks out of you (I have three THREE parent meetings this week…for parents who just figured out their kids are failing. Sigh. I guess I’m glad they figured it out.). Meetings and grading and explaining and planning and grading and sending the parent email (I did that at 11 PM last night. Normally I do it today, but I’ll be in a car for a significant portion of the day.). It’s supposed to be almost 90 degrees here today, but my feet are freezing. I should go sit on the deck. Really. It’s warm out there.

I am glad to say that I finally finished the quilting on the small quilt.

The lighting in here seems worse than usual…so quilting during the day is easier (although impossible during the week). I’ve been considering pulling this room apart at the beginning of summer, removing wallpaper, replacing flooring, painting the whole thing, maybe a new window, take the TV I never watch out and put more shelves in, replace a bunch of plastic drawers with something more sturdy and wall to ceiling, maybe even put in French doors instead of the sliding door so I can get more air in here…or something. But I don’t think I can afford it. I can think about it though and price shit out and see if it’s something I can do in the future. 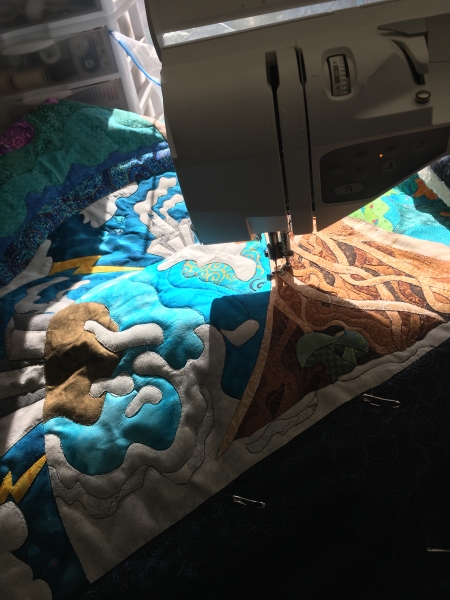 At some point, I won’t be paying for college any more.

This was really quick to quilt because it’s small. The tree leg was the most complicated bit. It was only 4 hours and 45 minutes total.

But it was just big enough that I wouldn’t have enough fabric for binding…I generally buy half yards, and that’s what this was going to take. 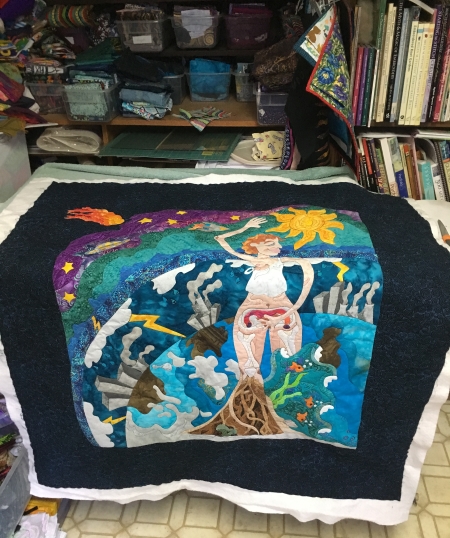 Here she is trimmed…

Then settled down to some TV and finishing this finally. Packed up all three blocks to send back to Social Justice Sewing Academy…

And then graded for a while last night…cleared out all the makeup work (37 emails) and input those, plus pulled grades for another assignment from the website. I don’t have to grade anything but the last question…and then it gives me the score. Easy peasy.

Then heard briefly from the girlchild. With 11 hours difference, her day is my night etc. But this morning, I heard a lot. I’m going to let her tell her own story on her blog, though, although she’ll need wifi to get that posted. There are two posts so far, but she’s got another two written and ready to post. You can read her here if you want…all I can tell you know is that this is her bed in her host family’s house…and she’s feeling a little overwhelmed. (The bed alone would do that to me.) 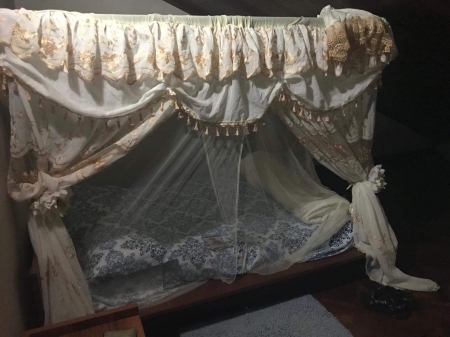 I remember doing this…barely knowing the language, staying in a strange house. It’s hard. But worth it. I hope she feels better after a long night’s sleep. She’s trying to learn two languages at once and adjust to a new place and not get sick. Hard stuff. Makes me appreciate my host family even more. They were really easy compared to some.

Here’s the fabric I bought after they came out of the washer. I didn’t allow myself to wander and shop much. I didn’t have much time and I don’t have much money. Although! The first check for the commission piece showed up yesterday, so I’m going to be starting tracing Wonder Under tonight! That’s actually exciting. I’m looking forward to it. In fact, I got some of the purplish fabrics for the spacey bit I think. Or I just liked them. Yeah that’s it. 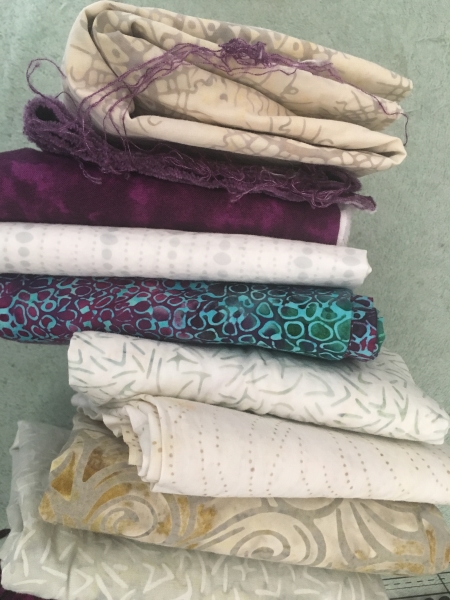 There’s the one I picked for the binding. I actually picked two, but couldn’t decide until I got home. The store was full of people, so I didn’t feel super comfortable throwing my naked climate chick out on the floor and trying binding fabrics out around her.

Sometimes you just have to buy more than one and decide in the peace and quiet of your own home.

So now I have three bindings to sew down, plus one quilt that needs a lot of hand embroidery…it’s going to be my go-to for after dinner but still watching the end of that TV episode. So it’ll probably be around for a while. I’m hoping to finish one of the others in January, just to say I finished something in January, because I’ve been lax as hell this month. Normally I do 50+ hours of art-related stuff each month, and the last month has been only 20 hours…and that’s WITH time off from school. Lame. Yeah, it’s OK, I know the kids being home and being discombobulated about what I was doing next was part of that. But I’m done now. I’m on a roll. I have 60 days to get this quilt done…partially because that’s what I put in the contract, but also because I leave on vacation in 63 days. Don’t laugh. I’ll be fine. I have a goal now, a place to look forward to. That helps so much. Really, it does.

*The Zombies, She’s Not There