Monday mornings. You know already what most of the day looks like. It’s gonna be hot. There’s a cool thing you’re doing in science, but then kids have to turn a major assignment in, and that’s always a hassle. “Did you mean TODAY? I’m not ready.” So where I worked over the weekend to make sure stuff was graded and done for YOU, you chose to do nothing, the same kids I caught trying to do their homework in class on Friday. We don’t work at home? I do. Maybe that’s a mistake (I don’t think it is), but certainly it’s something you should know how to do. Being successful in college doesn’t mean getting it all done in class…the same with many jobs. You make time for fun stuff too, true. I do that. Not as well as some of my students, ironically. Ending the day with my favorite past time…a staff meeting. Oh yeah baby.

So in good news, I finished the quilt. My photographer’s not answering email (minor issue)…but it’s ready for photography. It took almost 100 hours. Seriously, like 7 minutes short of 100 hours. I spent a good chunk of time on Saturday and Sunday sewing down binding and sleeves. Big is not fast in this instance…

Saturday night was out and about…this had no name…but I loved it. 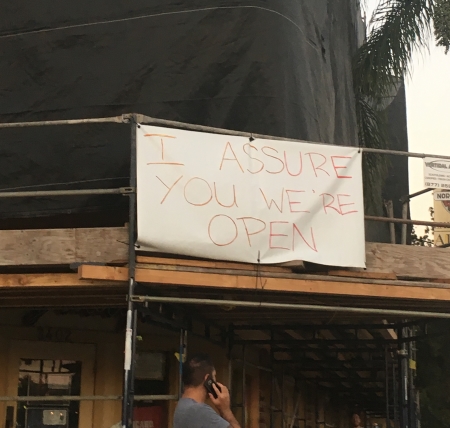 Home relatively early, so I did three nights of catchup on this… 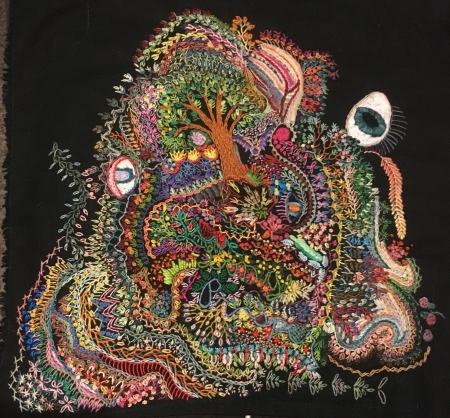 Finishing the eyeball. Still not as free and loose as I’d like, but maybe that’s just me.

Last night, I inked the quilt…just some additional shading and detail. Sometimes I feel like they need it…sometimes they don’t.

And then I piled it up on the ironing board, ready for ironing and dehairing for the photographer.

It’s hard when you finish one (late, like 9:30 at night) and you have the next one ready, but you’re not ready to start it…mentally. I often don’t have a lot of down time between pieces, and the next one is a drawing that’s enlarged and ready for all the rest of it. But I needed some space from this last one. I graded for a while…was really efficient for once. But I’d been on Facebook and Instagram, and the #MeToo stuff was getting to me. For one thing, I don’t like following a lot of trendy/fad stuff online. But this was legit, in that I think most men don’t have a clue that every woman or female-identifying person around them has dealt with this…and not just once…many, many times, some violently, some so vague that you didn’t know it happened until you were processing the day in your head. Some annoying, some creepy, some downright scary. It’s harder having a daughter, because you know she’ll deal with it too, and you’re fairly sure you didn’t prepare her for it, especially because she comes home and tells you about some incident where her friend behaved the way you would have, shut it down, but your own kids thought you were just paranoid, when in reality, you’d just tried to impart years of bad experiences, and obviously didn’t say it right. Or because of that mom/daughter thing, she doesn’t listen. She has to make her own experiences, and you hope that it’s more of the mild instances and not the scary ones. The irritating, annoying, is that all you think I’m here for? instances. Instead of the ones where you’ve got your keys in between your fingers and your heart is racing and you’re evaluating all the ways out and how fast you can run. Or even worse, it’s your boss and the way out means losing your job and benefits and you can’t really afford to do that.

So I drew. It’s not an awesome drawing. It’s just a drawing. I’m a visual person. So there it is.

And I’m lucky to have one of those men in my life who’s sitting there shocked at all the women in his FB feed who are typing out that hashtag, and who comes in and hugs me, says he’s sorry, sorry for all those assholes who don’t get it, who think they’re entitled, who may not even realize what they’re doing, because they don’t think before they act, or worse, those who have thought about it and can’t see why not. Does this hashtag rebellion reduce the impact of what Harvey Weinstein did? Fuck no…because he’s in a position of power, but even those who aren’t think this behavior is OK, and we need all those men who do NOT think it’s OK to yell about it too…because we women already know it’s all too easy to tune our voices out.

On that cheery note, happy Monday. May y’all survive the start of the work week, and maybe the catcalls and abuse will abate slightly today because of everyone putting it out there.