Hello Friday. I appreciate your showing up this morning, albeit a little early. Perhaps you could make sure that you are more quiet in the morning next time, so you don’t wake the puppy up. He barks and wakes me out of a deep and sound sleep, which at my age, is a rare enough thing that you should be much more careful. That said, you’re here, and I am glad. I’m hoping you go quickly, though, at least the daytime part, so I can, well and let’s be honest here, go back to sleep and wake up to Saturday. It must be hard to be Friday, to be so celebrated but basically asked to go away as quickly as possible…or at least get to the dark part of Friday, because it’s much easier to handle.

I spent about 3 hours at the vet yesterday, arriving after the dogs and my ex, to find out that the dogs were significant victims of foxtails. (Not my yard.) Oh yay and the future is fun. Pills for some and liquids for the other (in retrospect, pills might have been easier…), soaking of feetsies (oh my, they love that), and general mayhem with cones and trying to lick and manipulation of the cone zone. I guess I need to learn to shave those paws. Or find a groomer. Yes the right paw is the worst. Poor babies. 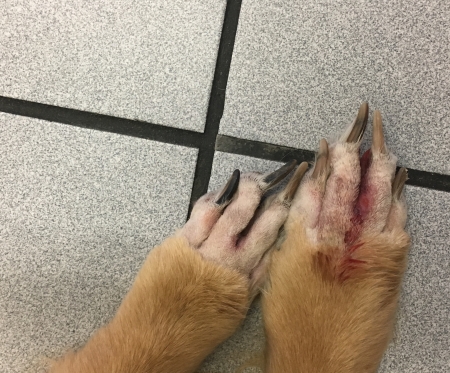 And those claws. Yeesh.

It was significantly late when I got them home. I had these threads in my mailbox, trying to pick an iris color…long story. It will make sense later. The one on the left is out…debating between the other two.

I have until tomorrow to decide. I think.

More progress on the hand. I did do seed stitch in the lower part of the wrist area and then filled in with some stem stitches. It’s almost all filled in.

Yeah. It’s strange. What can I say?I’m sure some people would be happier with all flowers, but I was getting sick of them.

Then I traced. Finished it, in fact. It’s small. It has only 290 pieces. It only took a little over 2 hours…

I was going to start cutting them out last night, but I was way too tired. I actually went to bed before midnight. Twenty-four days of school left. I’ll be gone for two of them. One of them is testing. One is a field trip. One is the last day of school, which is always a bit hellish. We start teaching sex ed early this year…more content…so next week. I don’t feel ready. Oh well.

And then there’s this. Some of you may have seen this.

I don’t doubt that…it’s just the definition of nice that’s the problem. Some parts of this world we see every day are really pissing me off at the moment. It makes it hard to be NICE. Really. Anyway, I’m hoping to have some energy to cut stuff out tonight, but will also have all the stuff I was supposed to do yesterday and didn’t do. Crap. Oh well. It is Friday.