In a different place today, in my head. Those late-night conversations I have while I’m trying to fall asleep don’t help. Last night was better, because I know I am just going to keep making art the way I do, drawing what I want (I can’t tell you how many people are demanding I do more penises now…and if they come up? That’s fine. Come up…heh heh heh…see, I AM a middle-school teacher. But I really am gonna just draw like I normally do, without all y’all watching over my shoulder), making the quilts that I want, trying to meet all my deadlines. That’s what I need to focus on. Not the crazy. Hear the good and ignore the bullshit that major companies make up to make themselves look better (by the way, AQS, it didn’t work. I still think you suck. And I’m not the only one. You didn’t count on some introverted antisocial quilter from East County being louder than you. Thank you, internet.).

Whatever. Actually, some part of me wants to enter every AQS show from now until I die, but I don’t have a lot of extra money and I don’t want any of it going to them. I’ve never entered an AQS show. I don’t plan to start now.

SAQA has contacted me, and they’ll release a statement soon. I think they really are trying to change some of the stuff that has not been great in the past. I think one of the best things about this was the people on the floor at Grand Rapids who took a picture of my quilt and were showing it to the viewers and telling them it was banned. That warms my heart.

Someone asked about my exhibition plan…and I always have one. I always enter some, like Art Quilt Elements (got into that this year), Quilt National, Visions (those are always long shots), Quilts=Art=Quilts. I don’t always get in. I look for the SAQA shows that are going to travel, especially the museum ones. I don’t even enter the regular IQF show. I can’t enter my local quilt show, because they have some clause about “family friendly” or whatever it is now. I don’t live in a particularly progressive county. We have a SAQA regional show in a local performing arts center, and it’s always a toss up as to whether I’ll have work that can show there…I didn’t this year. I don’t always plan to have a smaller no-naked quilt lying around. So none of this was expected. I live sort of on the edge of quilt world and art world.

I’m trying to get this next quilt done, despite all this and the stuff at school and dealing with the kids being gone and the herd of dogs I’m now managing. It’s a better place for my head than out in Wonder Land.

I finished laying out the last of the human figures, the biggest one, but also mostly hidden by the figures in front of it…which is an interesting concept in itself. 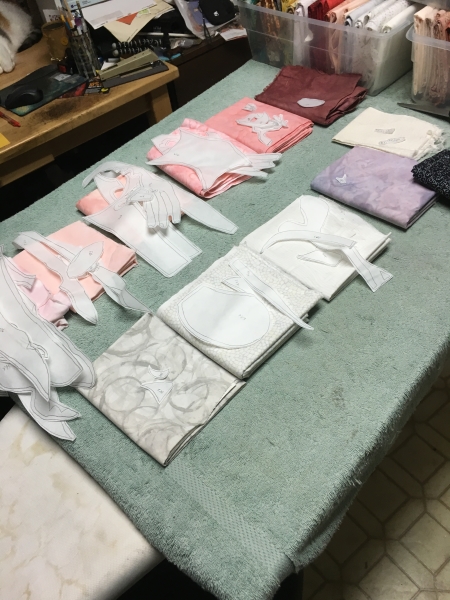 I tend to use the same flesh colors over and over until there isn’t enough of it to use anymore. I have one flesh fabric that I bought yardage of way way way back, like when I started art quilting. Seriously, it’s in my first real art quilt, back in 1999 or so. But usually I only buy 1/2 yards, so there isn’t a lot of it if there are big flesh pieces in the quilt. It might not do more than two quilts or bodies.

But I still hadn’t done all the inner pieces, all the non-fleshy bits. It was a ton of pieces by then. An overwhelming pile. 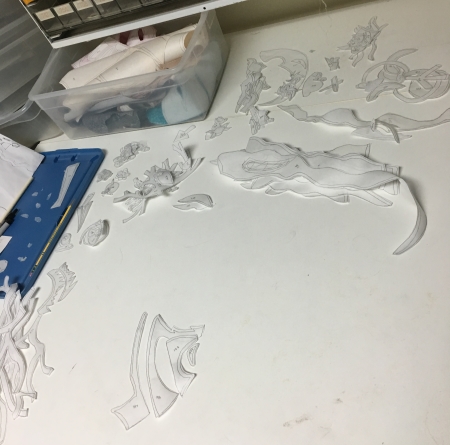 But I put a dent in it…an eyeball here, a lightning bolt there. Until I was too tired. About 2 1/2 hours last night, I think. I’m in the 1000s, but I still have a bunch of filler pieces to do. So I’m getting close to done. I don’t think I’ll finish tonight, but I might get close.

Here’s the box…glad I moved to the bigger one.

Kitten keeps adjusting music and video by lying on the keyboard. 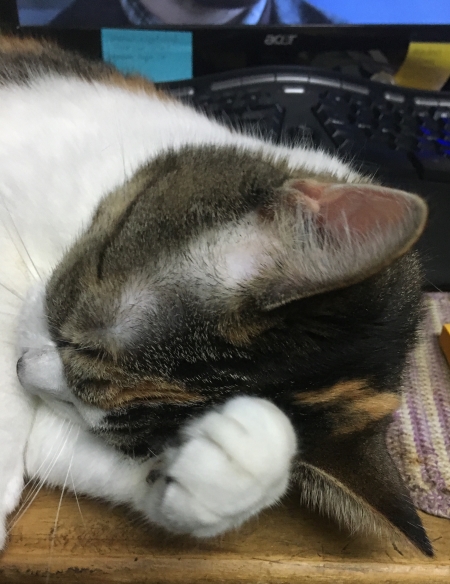 Apparently she doesn’t like Gillian Anderson’s British accent any more than I do.

OK. Artmaking in the brain. Because the rest is too much chaos, even for me. (That may include my job, for which I need to leave rather soon.)

4 thoughts on “Living Life Gets Hard to Do*”